In fact, European Commission has stated that it plans to bring international shipping into the EU Emissions Trading System (ETS).

The EU ETS has been described as a “regional” system, but bringing international shipping into that system using the MRV scope would regulate the operation of ships on several of the world’s seas and oceans, including on the high seas and in waters adjacent to non-EU nations, as WSC noted.

In light of the situation, the paper examines the effect of introducing an EU carbon pricing mechanism for shipping that is applied not only to intra-EU voyages, but also to extraterritorial voyages outside of the European Economic Area (EEA).

The World Shipping Council asks EU decision-makers to consider the points in this paper as they discuss bringing shipping into the EU ETS and to limit the proposed ETS to intra-EU shipping.

This question of the geographic scope of any ETS system for shipping must be addressed before the European Commission can turn to the many technical details that would be involved in creating such a system. If the current MRV geographic scope is used, a majority of the emissions covered by the system would occur outside EU waters, in many cases from voyages extending thousands of miles across the globe.

The cargo concerned is not just EU imports and exports; it is also the imports and exports of the EU’s trading partners. This will create trade tensions and raise legal and diplomatic concerns about the geographic reach of a unilaterally imposed emissions charge. The EU would be well advised to avoid extraterritorial application of the ETS, WSC suggested.

Overall, International Chamber of Shipping (ICS) issued a study which explores and addresses the implications that may arise from the application of the EU’s Emission Trading System (EU-ETS) to maritime transport. 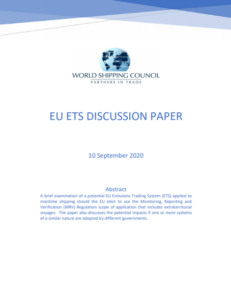