Home
»
Uncategorized
»
What are the 100 companies leading the ocean economy

Overall, the companies generated $1.1 trillion in revenues in 2018, which represents 60% of the total. Commenting on the findings, Henrik Osterblom, who co-authored the paper published in the journal Science Advances, said that “there is muck talk about the need for sustainable oceans, but there’s very rarely a conversation about who it is that needs to do the job.”

The team of researchers focused on eight sea-based industries ranging from container shipping to seafood production and offshore wind.

The “Ocean 100” list was topped by offshore oil and gas giants including Saudi Aramco and Brazil’s Petrobras, with only one firm from outside the industry, Danish shipping company A.P. Moeller-Maersk, making the top 10. 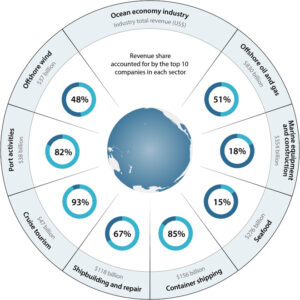 Namely, the biggest industry in the Ocean 100 was offshore oil and gas, whose TNCs accounted for approximately 65% of the total revenues, followed by shipping (12%), shipbuilding and repair (8%), maritime equipment and construction (5%), seafood production (4%), cruise tourism (3%), and port activities (2%).

He also added tha the study confirms that a relatively small number of companies will be central to this challenge, and have a real opportunity for leadership. 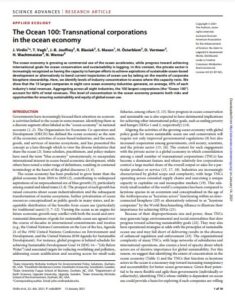