Home
»
Uncategorized
»
UNCTAD review of maritime transport: Shipping trade to plunge by 4.1% in 2020

The report forecasts a grim outlook for maritime trade in the short-term, but UNCTAD expects maritime trade growth to return to a positive territory and expand by 4.8% in 2021, assuming world economic output recovers. However, it highlights the need for the maritime transport industry to brace for change and be well prepared for a transformed post-COVID-19 world.

The global shipping industry will be at the forefront of efforts towards a sustainable recovery, as a vital enabler of the smooth functioning of international supply chains. The industry must be a key stakeholder helping adapt ‘just-in-time efficiency’ logistics to ‘just-in-case’ preparedness, 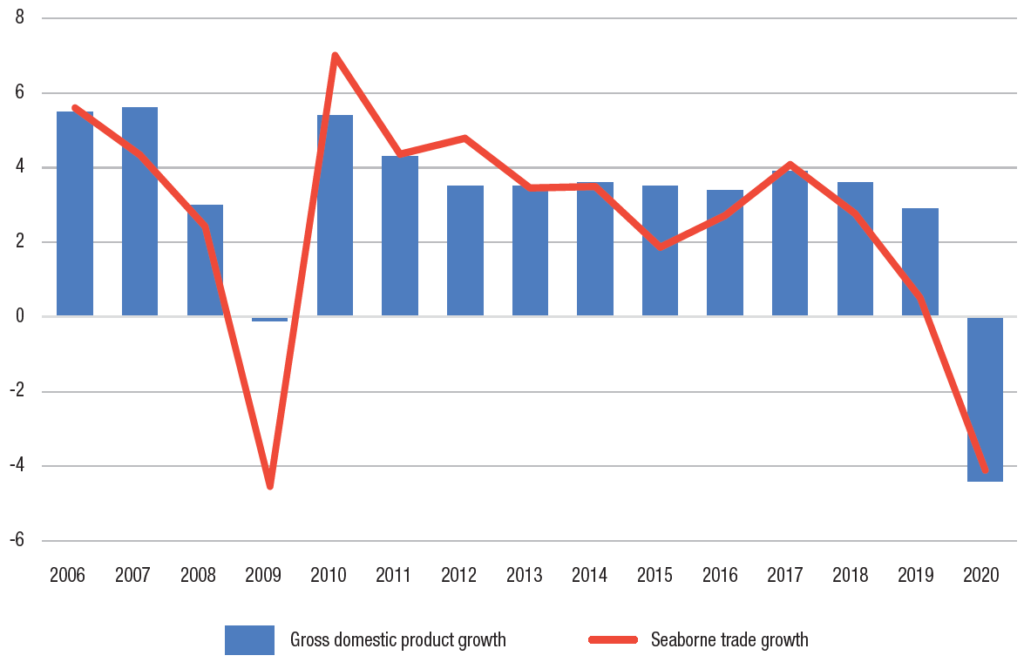 The pandemic has also exposed how unprepared the world seemed to be in the face of such a crisis, the report observes, underscoring the urgent need to invest in risk management and emergency response preparedness in transport and logistics.

UNCTAD’s director of technology and logistics, Shamika N. Sirimanne, said the pandemic should not push to the back burner action to combat climate change in shipping.

The momentum of current efforts to address carbon emissions from shipping and the ongoing energy transition away from fossil fuels should be maintained,

Furthermore, the pandemic unveiled the need for digitalization and eliminating paperwork in shipping, including in ports, reinforcing the need for standards and interoperability in electronic documentation, UNCTAD says.

On the flip side, the pandemic has also highlighted that digitalization comes with increased cyber security risks.

Responses to the pandemic

At the peak of the crisis, the container shipping industry adopted more discipline, cutting capacity and reducing costs to maintain profitability instead of market share, the report notes.

As a result, freight rates remained at stable levels despite the depressed demand. From the perspective of shippers, these strategies meant severe space limitations to transport goods and delays in delivery dates.

To cope with pandemic-related disruptions, players in the maritime sector adjusted their operations, finances, sanitary and safety protocols as well as working practices and procedures.

In addition, several governments, through their border agencies, port authorities and customs administrations, made reforms to keep trade flowing while keeping people safe.

Border agents, port workers and customs officials play an essential role in keeping trade moving, helping us to navigate through the crisis. It will be important to assess the best practices that emerge from their experiences to strengthen trade facilitation in the years to come,

COVID-19 hit world trade after an already weak 2019, driven by China-US tensions, uncertainties around Brexit, complaints made by several countries against Indian tariffs, the Japan-Korea trade dispute and general moves towards protectionism. The report estimates that tariffs cut the volume of maritime trade by 0.5% in 2019.

More notable facts and figures on global maritime trade in 2019: