On 21 May 2019, the general cargo vessel Karina C arrived in Seville, Spain and berthed port side alongside the Muelle del V Centenario.

The vessel visited the port to load a cargo of cement, which commenced during the morning of 23 May.

As explained, during the cargo operations, the second officer had been working at the aft end of the main deck and was attempting to pass between the hatch covers and the stationary crane.

Unseen by the crane operator, he was crushed when the crane moved, closing the gap.

In light of the situation, the chief officer immediately reversed the crane and the second officer fell onto the deck, where he received frst-aid and cardiopulmonary resuscitation from the deck crew and shore paramedics.

Following there, an emergency services doctor, who was informed of the incident, told the crew that the second officer probably died after having a heart attack.

Probable cause of the fall

As UK Maib noted, the accident occurred on the second officer’s birthday and his postmortem toxicology
report showed that he had a signifcant quantity of alcohol in his bloodstream.

Ship’s decks are dangerous places and this accident could have been avoided if personnel operating Karina C’s deck that day, had adhered to established safe working practices. The limited space available and ambient noise on deck mean that travelling gantry cranes, common on many operators’ vessels, can be particularly hazardous. 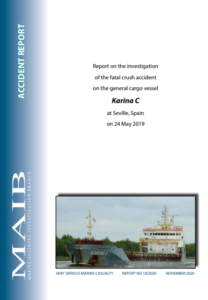