At about 1125 on 17 September 2019, two fire and rescue service boats – a 4.7m Zodiac Milpro inflatable boat and a 6.4m Delta rigid inflatable boat – were in collision while undertaking boat training and familiarization on the River Cleddau near Milford Haven, Wales.

The collision resulted in one of the firefighters who was taking part in the training onboard the Zodiac, being struck by the Delta RIB and sustaining fatal injuries.

The collision occurred because both boats were operating at speed and carrying out un-coordinated manoeuvres in the same stretch of the river. The manoeuvres resulted in the boats heading towards each other and the subsequent action taken by both boats to avoid a collision was unsuccessful.

Namely, the Delta RIB’s helmsman attempted to pass between the Zodiac and the shoreline as his boat exited a large turn made at speed. The Zodiac’s helmsman, initially unaware of the Delta RIB approaching, turned his boat sharply to port as part of his training manoeuvres, which resulted in the boats heading towards each other.

It is unclear why Rescue 1’s helmsman decided to undertake a circular turn to port in the vicinity of N207, but given the speed the RIB was travelling it would have been prudent to have planned a greater passing distance from the slower boat, whose exact intentions were unknown.

-the Mid and West Wales Fire and Rescue Service to:

-the National Fire Chief’s Council to: 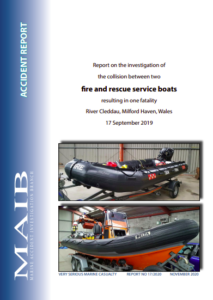