With these two incidents, a total of 33 incidents have been reported in the Singapore Strait during January-November 2020 compared to 31 incidents occurred during the entire year of 2019. In light of the continuous increase of incidents in the region, ReCAAP ISC issued a Special Report on 23 Nov, to provide the modus operandi of the perpetrators and recommendations to shipping and authorities of littoral States to address the threat. 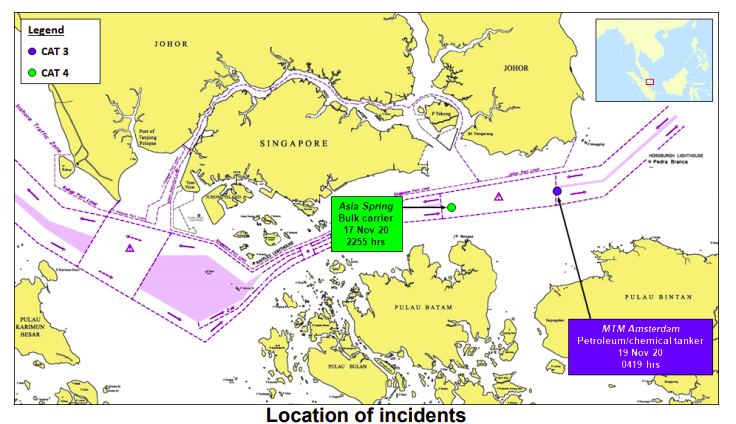 The first incident involves the Singaporean-flagged petroleum/chemical tanker MTM Amsterdam, approximately 10.6 nm from Pulau Nongsa, Indonesia in the eastbound lane of the Traffic Separation Scheme (TSS) in the Singapore Strait, in the early morning hours of 19 November.

While underway, two perpetrators armed with knives were sighted at aft poop deck. The alarm was raised and a search onboard was conducted immediately.

The master reported the incident to Singapore Vessel Traffic Information System (VTIS); and that the perpetrators had escaped undetected. Nothing was stolen and the crew was not injured.

Then, the ship proceeded on its passage to China. The Republic of Singapore Navy (RSN) and Singapore Police Coast Guard were informed; and the Malaysian and Indonesian authorities were notified.

The second incident involves the Panamanian-flagged bulk carrier Asia Spring, approximately 2.9 nm north of Pulau Nongsa, Indonesia in the eastbound lane of the TSS in the Singapore Strait, in the night of 17 November.

While underway, three perpetrators were sighted on the main deck. The alarm was raised and crew mustered. The perpetrators escaped from the stern of the ship.

The master reported the incident to Singapore VTIS. Nothing was stolen and the crew was not injured. The ship did not require assistance and then proceeded on its passage to China.

The RSN’s Maritime Security Task Force (MSTF) and Singapore Police Coast Guard were also informed; and the Indonesian authorities were notified. A safety navigational broadcast was initiated to alert mariners.