At about 1700 on 12 October 2019, the Maltese registered LPG tanker Seasurfer ran aground in the Port of Praia, Ilha de Santiago, Cabo Verde.

Prior to the grounding, Seasurfer was manoeuvring in the port’s turning basin to berth port side alongside. A local pilot was on board and one harbour tug was assisting the vessel.

Soon after dropping anchor off the assigned berth, the vessel took a sudden sheer to starboard. The tug, helm and the ship’s main engine were used to check the sheer and align the vessel with the jetty.

However, the subsequent action of the tug’s thrust, the vessel’s propulsion, helm and anchor, caused the stern to swing to port and set lateral movement towards the inner side of the breakwater.

The increased speed ahead averted the stern closing-in on the breakwater but the bulbous bow came in contact with the seabed. Seasurfer was pulled back in the turning basin but the subsequent manoeuvres swung the vessel rapidly to starboard and the port side ran aground on the shoaling depth, just outside the periphery of the turning basin.

Seasurfer sustained damages to the bulbous bow, tips of the propeller blades and underwater hull port side. There was no hull breach and no oil pollution.

The vessel’s bow advanced beyond the limits of the navigational fairway and came in contact with the shoaling depth.

The Company issued a Fleet Circular, establishing a new procedure for non-routine ports whereby prior to calling a new port, all masters are required to:

Moreover, Company’s superintendents are required to review and advise senior Company officials whether the designated new port is safe or not.

In view of the investigation and subsequent actions, Transport Malta recommends the Port Authority of Praia to: 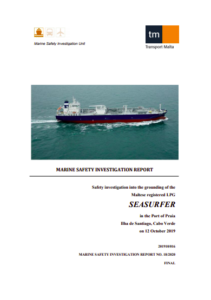