Crew members on Ruby-T were testing the rescue boat crane’s limit switches, in preparation for a vetting inspection.

To reset the system, the bosun used the hand crank to wind down the wire and disengage the limit switch.

Once he saw that the wire was lowering manually, he turned around and focused on the crane control box to resume lowering under power.

As soon as he engaged the crane control box, the hand crank, which was still mounted on the crane, rotated in a fast motion and hit the bosun directly on his back.

This resulted in his chest being slammed against the crane control box. As a result, the bosun had suffered from three fractured ribs.

Immediate cause of the accident

At the time of the accident, the bosun was standing in a relatively restricted space of the crane’s platform, facing the control box. The switch disabling valve was closed and the hand crank was left mounted in the squared spindle. As soon as the bosun induced the R/B winch, the hand crank rotated and hit the bosun on his back.

The limit switch of the R/B winch was disengaged, allowing the winch to rotate even though the shield was lifted, due to the hand crank being inserted in the squared spindle.

During the course of the safety investigation, the company had taken the following safety actions: 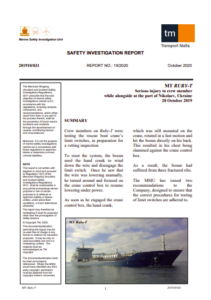