The investigation of this incident comes amid a worrying trend of container ship fires worldwide. To address the issue, five partners in the Cargo Integrity Group, including Container Owners Association (COA), the Global Shippers Forum (GSF), the International Cargo Handling Co-ordination Association (ICHCA), the TT Club and the World Shipping Council (WSC) issued a guide in September, to serve as a route-map for the CTU Code and to assist wider understanding of good packing practices.

On 11 November 2019, Filia T was en route to Singapore. At around 0900, the bridge received a call from the chief officer, reporting that smoke was emanating from a container on deck. The master was immediately notified and emergency procedures for fire onboard were initiated.

The chief officer reported that the container from which smoke was emanating did not contain any dangerous goods.

After contacting the charterer, the master verified that the commodity inside the container was bags of cinnamon leaves.

Probable cause of the fire

The investigation could not positively determine the cause of the fire, however, it was suspected that sufficient heat could have been generated either by friction or self-heating of the cargo.

Although closed, a dry cargo container is not gas-tight; therefore, air would have been able to enter the container, albeit not sufficient for the required ventilation, but enough to start and sustain a fire, as the dynamics of the events have shown.

The bags of dry cinnamon leaves, including the chemical constituents of the leaves, formed the combustible material and also provided for the subsequent exothermic chain reaction.

Heat was probably provided by either friction or self-heating of the cargo. As the condition of the cargo was not made available to the safety investigation, spontaneous combustion of the cargo, due to its inherent properties, was not excluded as another probable cause of the fire.

Following this occurrence, the company carried out the following safety actions:

Transport Malta recommended the flag State Administration to review the findings of this safety investigation report with the aim of submitting a paper to the relevant IMO Sub-Committee for consideration to classify this cargo either as a Class 4.1 or Class 4.2 of the IMDG Code. 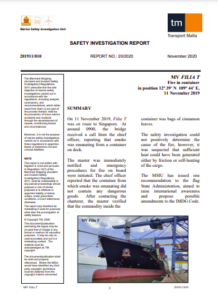