… the activity of the merchant fleet has remained surprisingly resilient to strong headwinds with rising transits in the Suez Canal in the first four months of 2020.

In the beginning of 2020, the first half saw shipping markets experiencing chaotic conditions, as the pandemic severely impacted the industry and its operations. BIMCO expects that this situation will be translated into declining demand across all the shipping markets.

In addition, this negative result is echoed by the World Bank which estimates that world trade will decline by 13.4% in 2020, the largest decline since World War II, and exceeding the 10.4% drop seen in 2009 by some distance. 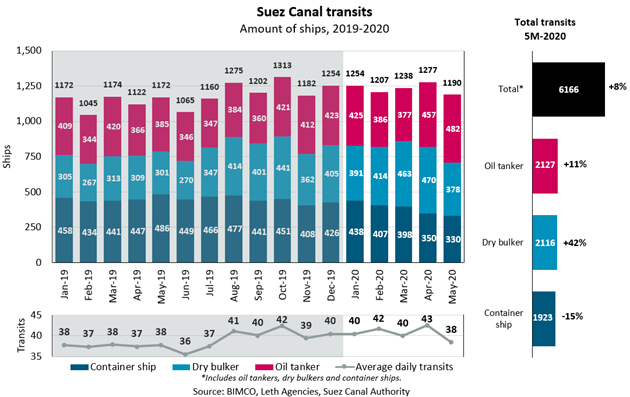 Concerning oil tankers, the 2020 earnings seem to have positively impacted tankers sailing through the Suez Canal with oil tanker transits in April hitting 457, only to be beaten by 485 transits in May 2020, an all-time high. Product tankers accounted for roughly three quarters of the transits in 2020, which corresponds to the ratio seen in 2019.

Sand notes that the increase in oil product tanker rise can be explained by the increased demand for IMO 2020 sulphur cap bunker fuel reshuffling, but also the outbreak of the OPEC+ oil price war which sent earnings skyrocketing and likely increased fleet productivity.

In May 2020, 390 oil product tankers passed through the Canal, 233 of which were Medium-range (MR) and Handysize tankers.

In addition, dry bulk ship transits rose by 42% in tota transits year-on-year; More specifically, they increased to 2,116 in the first five months, a jump of 621 transits compared to last year. 51% of the total dry bulker transits in 2020 were Panamaxes, compared to 44% in the same period last year.

Data provided by the Suez Canal Authority report that:

Evidently, bulkers primarily transit through the Suez Canal laden in the Southbound direction, often carrying dry bulk cargoes for the Middle East or Asia, while it is less common to transit through while ballasting.

Container ship transits through the Suez Canal provide credence to this bleak outlook with total transits down 15% year-on-year. Transits have been faltering continuously since January, where carriers started to restrict container ship capacity by blanking sailings.

The idle container ship fleet has remained at record-breaking levels through a solid portion of 2020, with container ship transits through the Suez Canal reflecting the widespread blank sailings, dropping 32% year-on-year in May.

Concluding, assuming the global economy gradually recovers from the shock of the COVID-19 pandemic and that protectionist walls are not built much taller, it is likely that world trade will continue to grow, much to the benefit of the Suez Canal.