The NGO provides an overview of accidents that took place on the beaches of South Asia and recent on-the-ground developments, including our activities.

According to the report, at least five workers died while dismantling ships at shipbreaking yards in Bangladesh in the final quarter of 2020. Moreover, two workers lost their lives while dismantling two different vessels.

More specifically, according to local media, in one of the cases the cutting process took place at a very fast pace since the workers were under pressure to finish the job.

Finally, another man lost his life after being hit by a large iron piece at Khawja shipbreaking yard in Chattogram, Bangladesh.

Overall, in 2020, at least four accidents were reported at shipbreaking yards owned by Kabir Steel group. In total, 170 ships were broken in the third quarter of 2020. Of these, 65% were sold to the beaches of South Asia, the report notes.

In these yards, poor work safety practices are often the main cause of incidents that take place in South Asia.

In addition, about one-third of the ships sold to South Asia in the third quarter changed flag to the registries of Comoros, Gabon, Palau and St. Kitts and Nevis just weeks before hitting the beach.

These flags are not typically used during the operational life of ships and offer ‘last voyage registration’ discounts.

This practice is often used to avoid EU rules on breaking ships at facilities that are safe and environmentally sound. 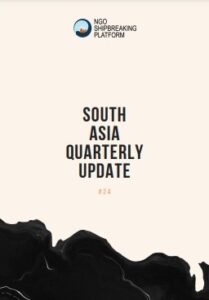