The RMI-registered container ship CAPE MORETON, managed by Ahrenkiel Steamship GmbH & Co. KG, was sailing from Hong Kong, bound for Tianjin, People’s Republic of China (PRC), when it collided with MIN XIA YU 04555, a PRC-registered fishing vessel, at about 0416 on 23 January 2019.

As a result of the collision, two fishermen from MIN XIA YU 04555 were swept overboard. A search for the missing fishermen was coordinated by authorities in the PRC.

They were not located, and the search was suspended after six days. The fishermen are considered missing at sea.

The marine safety investigation conducted by the RMI Maritime Administrator identified the following causal factors contributed to this collision:

An additional factor identified, but which did not contribute to this collision, was MIN XIA YU 04555’s failure, while actively fishing, to display the lights required by the IMO’s Convention on the International Regulations for Preventing Collisions at Sea, 1972 (COLREGs) for “vessels engaged in fishing, other than trawling.”

In response to this very serious marine casualty, the Company has taken the following Preventive Actions.

It is recommended that the Company review and amend, as necessary, the procedures related to navigation watchstanding during times of dense vessel traffic to ensure they are adequate to prevent a similar occurrence. 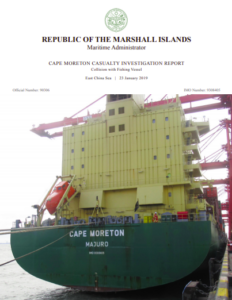