Claiming the title of the most high-level shipwreck in history, Titanic is far more than a famous tragic story as it redefined the concept of maritime safety and led to the adoption of SOLAS Convention.

The British luxury passenger ship RMS Titanic began its maiden voyage from Southampton, England to New York, US, on 10 April 1912. After calling at Cherbourg in France and Queenstown (now Cobh) in Ireland on the same day, the ship headed west to New York, where it was expected to arrive on the morning of 17 April.

When the ship was about 375 miles south of Newfoundland, on 14 April, 11:40 p.m., lookout Frederick Fleet spotted an iceberg immediately ahead of Titanic and alerted the bridge. First Officer ordered the ship to be steered around the obstacle and the engines to be reversed, but it was too late; the starboard side of Titanic struck the iceberg, rupturing five of its 16 supposedly watertight compartments below the waterline, while the ship could only survive four flooding.

Titanic began sinking bow-first, with water spilling from compartment to compartment as its angle in the water became steeper. Meanwhile, distress signals were sent and passengers and some crew members were evacuated in lifeboats, many of which were launched only partially loaded.

At 2:20 am, the ship broke apart and foundered with more than 1,000 people still aboard. Just under two hours after Titanic sank, the Cunard liner RMS Carpathia arrived and brought aboard an estimated 705 survivors.

Titanic: A timeline of events

All people who did not manage to get on lifeboats immersed in lethally cold water with a temperature of −2 °C (28 °F) and almost all died of cardiac arrest or other bodily reactions to freezing water, within 15–30 minutes. Only five of them were helped into the lifeboats, though the lifeboats had room for almost 500 more people.

As a result, more than 1,500 people lost their lives, and about 705 were rescued, although theories on the exact numbers vary due to confusion over the passenger list, which included some names of people who canceled their trip at the last minute and some who were double-counted on the casualty lists.

Passengers traveling first class were significantly more likely to survive than other passengers, while women and children were more likely to survive than men, due to a “women and children first” protocol in lifeboats. To put that into perspective, 387 of the 462 men in third class onboard perished in the disaster, and only 4 out of the 144 women in first class were lost.

Although unsurprisingly, third class suffered the greatest loss, subsequent claims that passengers in steerage were prevented from boarding lifeboats were largely dispelled. The high death toll in third class was mostly attributed to the lack of a proper general alarm that did not permit passengers to realize the emergency until it was too late, while the difficulty of simply navigating the complex Titanic from the lower levels caused some to reach the top deck after most of the lifeboats had been launched, according to Britannica.

-Climate conditions: The immediate cause of the sinking was collision with an iceberg, which reminds us that, in every tragedy, there is human error along with bad luck. In that time of that year, warmer-than-usual waters in the region made Atlantic waters a fruitful ground for corralling icebergs at the intersection of the Labrador Current and the Gulf Stream, while unusually high tides in January 1912 possibly dislodged icebergs of Labrador Sea sending them towards the Titanic route some months later. In addition, the two lookouts onboard, Frederick Fleet and Reginald Lee, had a difficult job that night due to the fact that the ocean was unusually calm that night: As there would be little water breaking at its base, an iceberg would be more difficult to spot.

-Neglecting warnings: Titanic received a series of warnings from other ships of drifting ice in the area of the Grand Banks of Newfoundland. One of the ships to warn Titanic was the Atlantic Line’s Mesaba, a few hours before the tragedy, but the message was never relayed to the Titanic’s bridge. Shortly after, the nearby Californian notified Titanic that it had stopped after becoming surrounded by ice, but wireless operator Phillips, who was handling passenger messages, scolded the Californian for interrupting him: “Shut up! Shut up! I am busy.”

-Reversed engines: As soon as the bridge was notified of the iceberg, First Officer William Murdoch ordered a “hard-a-starboard”—a maneuver that would turn the ship to port (left)—and the engines reversed. The Titanic began to turn, but it was too close to avoid a collision. By reversing the engines, Murdoch actually caused the Titanic to turn slower than if it had been moving at its original speed. Most experts believe the ship would have survived if it had hit the iceberg head-on, according to Britannica. It has also been reported that, if the ship had stopped where it was hit, seawater would not have pushed into one interior compartment after another, and the ship might not have sunk as quickly.

-Timekeeping: Despite warnings on icebergs, the ship continued to steam at full speed, which was standard practice at the time. Ice warnings were typically seen as advisories with reliance placed upon lookouts and it was generally believed that ice posed little danger to large vessels.

-There were too few lifeboats: This did not cause the sinking but contributed to the high death toll. The 20 lifeboats onboard were enough for 1,178 people—about half the number onboard, and one third of Titanic’s total capacity— which was still in excess of the 1,060-person capacity under the maritime safety regulations of those days. Four of those boats were collapsible and proved hard to launch during the sinking. Even worse, the lifeboats launched were eventually only about half-filled, because crewmen worried that the davits would not be able to support the weight of a fully loaded boat. It is worth noting that the Captain had canceled the ship’s scheduled lifeboat drill earlier in the day of the sinking, and the crew was unaware that the davits had been tested in Belfast.

-Poor practices onboard: Due to drill cancellation, the crew had not been trained adequately in carrying out an evacuation. Those aboard Titanic were ill-prepared for such an emergency in accordance with accepted practices of the time, as ships were seen as largely unsinkable. Furthermore, many passengers on the aftermath of the sinking testified to the general confusion on the ship: A general warning was never sounded, causing a number of passengers and even crew members to be unaware of the danger for some time.

The role of the SS Californian

The British steamship SS California has been scrutinized over its inaction as it was the closest ship near the accident area, received the distress signals but failed to respond to them in accordance with law.  After warning Titanic of the ice field, the wireless operator turned off his radio. About an hour later, the crew of Californian see the rockets but fail to determine their source. Following controversies, it was determined that the Californian could have saved many, if not all, of the lives that were lost. However, as the true location of the Californian will likely never be conclusively known, some experts believe it was actually some 20 miles (37 km) away and would not have reached the Titanic before it sank.

More than 60 survivors in US and Britain joined forces to sue the White Star Line for $16,804,112 (about $419 million in 2018 USD), which was far in excess of what White Star argued it was responsible for as a limited liability company under American law.

The company petitioned the US Supreme Court in 1914, which ruled in its favor finding that the causes of the ship’s sinking were largely unforeseeable, rather than due to negligence. This limited the scope of damages survivors and family members were entitled to, prompting them to reduce their claims to some $2.5 million. Eventually, White Star only settled for $664,000 ( $16.56 million in 2018),

LEARN FROM THE PAST: Read in this series

The extended media coverage and the subsequent worldwide shock, due to the huge death toll, led to major improvements in maritime safety. The most prevalent one was the establishment of the International Convention for the Safety of Life at Sea (SOLAS) in 1914, which still governs maritime safety.

The first International Conference for Safety of Life at Sea was called in London in 1913, drawing up rules requiring that every ship have lifeboat space for each person embarked; that lifeboat drills be held for each voyage; and, because the Californian had not heard the distress signals of the Titanic, that ships maintain a 24-hour radio watch. In addition, the International Ice Patrol was established to warn ships of icebergs in the North Atlantic shipping lanes and to break up the ice. 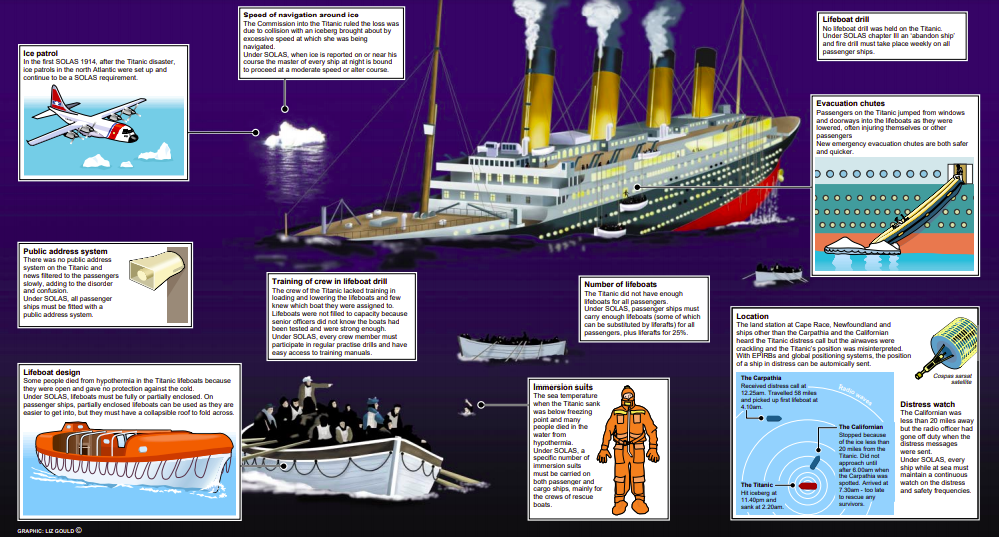