While the bulk carrier was underway at about 1045 hrs, an unidentified speed boat with three perpetrators onboard attempted to board the ship. The master reported the incident to the Philippine Navy Littoral Monitoring Station (LMS). There was no mention if the perpetrators were armed.

As the Sulu-based Abu Sayyaf Group/Kidnap-for-Ransom Group (ASG/FRG) elements are based in the area of the incident, the ReCAAP ISC urges ship master and crew to exercise extra vigilance when transiting the waters off Eastern Sabah and in the Sulu-Celebes Seas, in particular waters off Sibutu Island,

…ReCAAP ISC said in a special warning to shipping issued on 5 March. 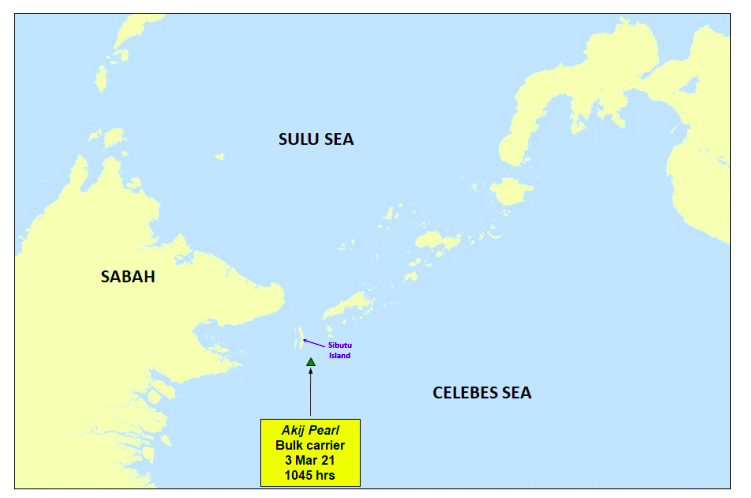 The risk of the abduction of crew in the Sulu-Celebes Seas and waters off Eastern Sabah is high as demonstrated by the abduction incident on 17 Jan 20, information of planned kidnapping in Sabah and Semporna, Malaysia, and the operation on 3 Nov 20 by the Philippine authorities in preventing a kidnap-for-ransom incident.

The ReCAAP ISC reiterates its advisory issued via ReCAAP ISC Incident Alert dated 21 Nov 16 to all ships to reroute from the area, where possible. Otherwise, ship masters and crew are strongly urged to exercise extra vigilance while transiting the area, and report all incidents immediately to the Operation Centres of the Philippines and Eastern Sabah Security Command (ESSCOM) of Malaysia.