Specifically, after the declaration of the pandemic, the tanker sector appeared immune, but it too has suffered from lockdowns and travel restrictions.

The US Energy Information Administration (EIA) estimated that global oil demand fell by 8.9% in 2020, from 101.2m barrels per day to 92.2m bpd. Though the drop in oil tanker shipping is slightly below this, demand for crude oil tanker shipping fell by 8.3% while oil product demand was down 5.2%. Measured in tonne miles, the fall in demand is slightly larger for both sectors: crude oil down by 9.2% and oil products by 6.3%.

Peter Sand, BIMCO’s Chief Shipping Analyst further explains that “after the oil market boom, a bust was inevitable for oil tanker shipping as travel and economic activity was restricted, but the scale of the shock was unknown. Looking back, the overall damage to tanker shipping has not been as bad as the damage done to global oil demand.” 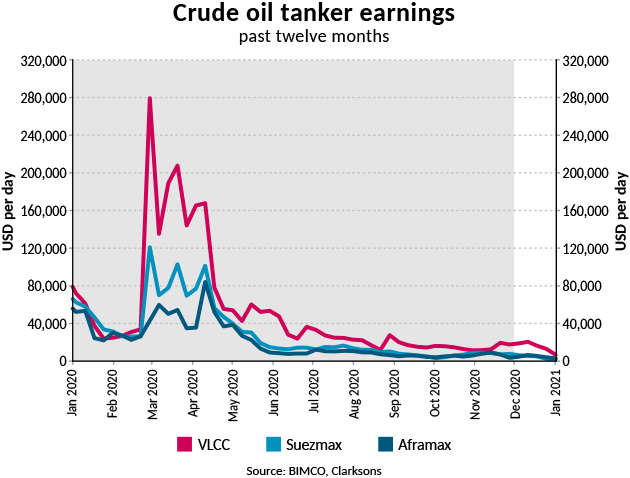 In addition, it is stated that the biggest decrease in tonne miles were in part due to Asia’s dominance and its importance when considering tonne miles, which in 2020 accounted for 63.6% of global crude oil imports and 36.8% of oil products. Asian imports of these fell by 60.9m tonnes (-5.1%) and 32.4m tonnes (-9.4%) respectively. In volume terms, the second largest falls in crude oil imports came from Europe and North America, where crude oil imports fell by 51.0m tonnes and 41.6m tonnes respectively. Outside Asia the largest drops in oil product imports came from North America (-8.8m tonnes) and Oceania (-6.7m tonnes).

However, the stability of crude oil imports over the course of 2020 hide the realities that unfolded behind the scenes. As the oil price war broke out in March, the market was rushed with cargoes, leading to the peak in freight rates, a spike visible when looking at export data. However, the rush of cargoes caused severe delays due to logistical challenges, and the crude oil was therefore only discharged gradually, flattening out import data.

It is added that in the second quarter, exports were up by 5.1% (4.5m tonnes) from Q2 2019, though volumes to some destinations were considerably higher. Exports to North America and the EU were up by 42.9% and 32.2% respectively, while those to the Far East were up by 5.3%. Despite the smaller percentage increase, due to Asia’s considerable market share, the increase in exports in volume terms to the Far East was not far behind those to North America and Europe. The largest drop was seen in exports to the Indian subcontinent, which fell by 2.0m tonnes (-18.8%). Combined, the rest of the world saw a drop of 2.9m tonnes. 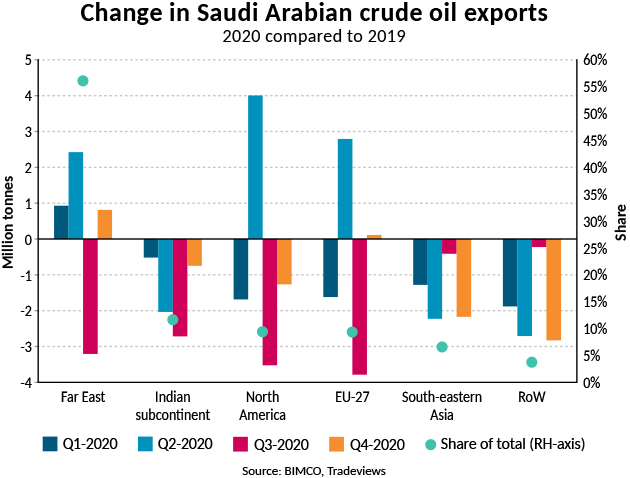 In the meantime, higher exports to Far East and North America in particular contributed to higher tonne miles which rose by 11.6% compared to Q2 2019.

However, Q3 brought losses across the board, with total exports down by 15.1%. Τhe European and North American exports were heavily impacted, with drops of 41.8% and 39.2% respectively (-3.5m tonne sand -3.8m tonnes). In volume terms, the fall in exports to Asia was similar, down 3.2m tonnes, though as volumes here are higher, this represents a smaller percentage drop (-6.7%).

The diverging paths of oil products, which is likely to continue as demand for some products (such as gasoline) recover faster than others (such as jet fuel), will continue to affect product tanker shipping, as trading patterns are shuffled and traditional routes disrupted.

Concerning the future, it was reported that the global oil demand is expected to slowly recover, while EIA forecasts that on a quarterly basis, it will not return to Q4 2019 levels until Q3 2022. OPEC will continue to cut millions of barrels per day of production, and demand for tanker shipping is unlikely to experience another positive shock. This will leave earnings below breakeven levels unless the OPEC+ alliance breaks down again and once more finds itself pumping and exporting at will.

Mr. Sand concluded that “Oil tankers are looking at a slow, uneven and unsteady recovery, as travel restrictions are once again tightened around the world, thanks to new virus mutations, even as vaccines are arriving left, right and center. In the longer term, the change in oil trade patterns is likely to have a negative effect, as the strong growth in US exports is unlikely to return as long as crude oil prices remain in their current range.”