On 8 September 2019, about 1015 local time, the liftboat Kristin Faye overturned while preparing to conduct work alongside a platform in the Gulf of Mexico, in Main Pass Block 64, about 18 miles east of Venice, Louisiana.

All three crew members abandoned the vessel and were rescued. One person suffered minor injuries during the evacuation.

Consequently, an estimated 120 gallons of diesel fuel spilled into the water. The vessel was declared a constructive total loss at an estimated $750,000.

The National Transportation Safety Board determines that the probable cause of the overturning of the liftboat Kristin Faye was the company’s inadequate preload procedure that did not account for crane movements or the planned loads (weights) to be lifted, resulting in a “punch through” of one of the vessel’s three legs.

Because the Kristin Faye overturned in less than a minute, it is likely that the seabed below the port leg became unstable, causing the leg to settle very quickly in what is known as a “punch through” in the industry. This caused the liftboat to lean over despite the effort of the captain to raise (retract) the other two legs.

The Kristin Faye and other small liftboats that lack preload tanks operating in the Gulf of Mexico typically conduct a preload test using only the weight (displacement) of the vessel, including any cargo or equipment. It is a simple concept used to conclude the vessel will remain stable while jacked up in an area of the Gulf where silt deposits, mud ledges, and “can holes” are prevalent. If the vessel does not shift an hour after planting its pads on the seafloor, the procedure assumes the vessel will remain stable.

See also: Do you know how many types of lifeboats exist?

After waiting for an hour at the elevated level, the captain raised the boom. Once the port crane boom was moved from its cradle (horizontal position) to the vertical position, the 22,500- pound boom’s center of gravity shifted about 17 feet toward the port crane pedestal at the forward port corner of the liftboat.

With this shift, the weight supported by the port forward leg pad increased due to the boom’s weight shift toward it. The weight supported on the forward port pad increased until the pad suddenly “punched through” the bottom, resulting in the vessel overturning in less than a minute, during which there was no time for the captain to adjust the legs to level the vessel and counteract the tilt.

In anticipation of lifting a 17,000-pound pressure vessel onto the platform, the preload test for the Kristin Faye, a liftboat without preload tanks, should have included sufficient weights, appropriately placed to replicate the load on each of the pads. For instance, the Kristin Faye’s preload test could have included locating the boom, with the pressure vessel attached, in the position that would have applied the greatest force on the respective pad.

Many alternatives are available to test the sea bottom before commencing elevated operations. Testing methods include:

Prior to jacking up to expected operating height and commencing operations, liftboat operators should conduct preload tests, with the hull close to the water, that simulate all planned operational loads. 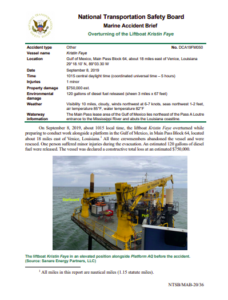