About 0930 on 4 November 2019, an explosion occurred aboard the moored tank barge IB1940 at the Illinois Marine Towing Heritage Slip on the Chicago Sanitary and Ship Canal in Lemont, Illinois, about 25 miles from Chicago.

The IB1940’s cargo of acetone had been unloaded, and the barge was being prepared for cleaning at the time of the explosion. No injuries or pollution were reported.

The National Transportation Safety Board determines that the probable cause of the explosion aboard the barge IB1940 was the company’s incomplete procedures that did not incorporate the safety instructions included in the Facility Operations Manual regarding the electrical bonding of air movers to barges.

This resulted in an unbonded air mover being operated in a cargo tank with residual acetone, thereby causing a static electrical discharge, which ignited flammable vapors in the tank.

The source of ignition was most likely a static electrical discharge from the air mover that was resting on the painted dogs of the tank-cleaning access hatch of cargo tank 2. The technician who installed the air movers could not recall if they had been bonded to the barge (ensuring that the air mover was properly bonded to bare metal on the barge) but did recall that they had not been tied off to prevent movement.

Postaccident testing indicated that resting the cast aluminum bell of the air mover on the four painted dogs of the tankcleaning access hatch without proper bonding did not provide good electrical bonding between the air mover housing and the barge.

An inadequately bonded air mover would allow the accumulation of electrostatic charge generated by the flow of the compressed air stream with water droplets and rust particles. Without a proper bonding connection, a static electrical charge would likely not safely dissipate to the grounded barge, but could instead accumulate, causing a potential spark hazard.

The explosion occurred soon after the air movers were started and before the residual acetone was completely removed from the cargo tanks. When the first technician found acetone in the cargo tanks, he did not record his findings in writing but instead reported them to the shipyard superintendent verbally; the liquid barge manager stated that he was told there was no acetone left on the barge to strip.

The quantity of residual acetone remaining in the cargo tanks was not properly communicated amongst the workers, and the air movers should not have been started before the tanks were verified to be completely empty.

Hazardous cargos with flammable vapors are subject to the risk of explosion. Shipboard and shoreside personnel working aboard vessels and barges carrying such cargos should establish and follow procedures for the bonding of all air-moving equipment when venting tanks. 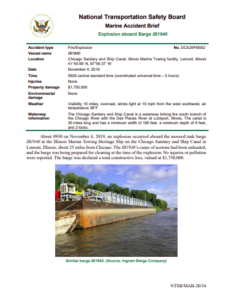