On 17 November 2019, about 0904, the barge YD 71 contacted the James T. Wilson Fishing Pier in Hampton, Virginia, after breaking loose from its mooring.

There were no people aboard the barge or on the pier at the time of the accident.

The National Transportation Safety Board determines that the probable cause of the contact between the barge YD 71 and the James T. Wilson Fishing Pier was a shackle pin in the mooring arrangement working itself free in heavy weather, leading to the barge’s uncontrolled drift.

Investigators found the mooring’s chain and hurricane loop intact. Neither the shackle nor its pin connecting the hurricane loop to the chain were found. Therefore, the barge could only slip its mooring if the shackle failed, or if the pin backed out after the weld attaching the nut to the pin failed.

It’s more likely the weld failed than material failure of the shackle bow or pin. This likely would have occurred over a period of time, with the strain of the four-foot storm wave action, near gale winds, and/or high tide breaking it free.

Moorings for vessels can be single-point failures that can lead to losses for both vessels and nearby infrastructure. Operators should identify failure modes of mooring arrangements and implement controls, including more frequent inspections if necessary, to avoid accidents. 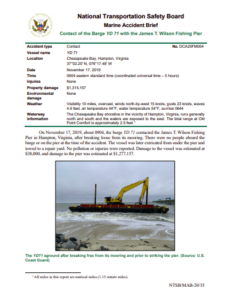