Namely, the Basel Action Network (BAN), the European Environmental Bureau (EEB), Greenpeace, and the NGO Shipbreaking Platform, warn that the European Union’s legislation allowing the export of toxic ships to developing countries, violates Member States’ obligations under the Basel Convention and is in contradiction with the EU’s new strategic economic and environmental policy initiatives.

To remind, the Basel Ban Amendment prohibits developed nations from sending hazardous waste, including defunct ships – to developing nations. This outright ban entered into effect in December 2019, and its application is limited to certain Basel Ban signatory nations, including EU member states.

By allowing the breaking of European vessels in the Global South, Europe is not only exporting hazardous waste and threatening people’s health in developing countries, but also contradicting its own ambition to boost the domestic supply of secondary raw materials – as set out in its circular economy action plan.

In light of the situation, NGOs call on the EU to seize the opportunity to boost safe and clean ship recycling in Europe, as well as to promote the design and building of toxic-free vessels and to push for ‘zero-emissions steel’ initiatives.

The EU can’t have it both ways. They cannot project that they promote a new way of thinking with the European Green Deal and prevent exports of hazardous wastes to developing countries, while seeking to bend their existing legal obligations to enable the shipping industry to do just that. 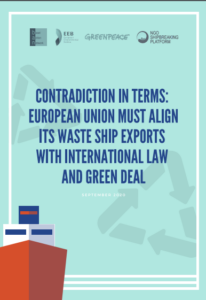