As Derek Langston, Head of Research at leading shipbrokers SSY informs, the current bulker orderbook of 56.1 Mdwt represents just 6.3% of the existing capacity, which is the lowest percentage in almost 30 years.

What is more, at the same time, the dry bulk carrier fleet is ageing, as the ratio of 15+ year old vessels to the orderbook is the highest since 2003.”

While these trends are taking place because of uncertainties over the direction of the market, they also reflect doubts over the speed at which financially viable designs for new low carbon ships can be developed.

Under this light, last week’s draft approvals at the IMO’s Marine Environment Committee (MEPC) could compound these trends for several more years as there seems little prospect of an immediate regulatory-driven acceleration in demolition.

To remind, the 75th session of the IMO’s Marine Environment Protection Committee (MEPC 75) took place remotely from 16 to 20 November. Among the key points were the approval of amendments to MARPOL Annex VI, with new requirements addressing GHG emissions and the approval of guidelines for onboard fuel sampling.

Such a development could mean significant implications for both the dry bulk sector’s supply/demand balance and CO2 emissions.

What is more, along with limited scrapping activity until enforcement takes effect, the new IMO measures increase the prospect of continued slow steaming by much of the existing dry bulk carrier fleet, says Simpson Spence Young. This is at a time when a ‘middle-age spread’ is developing in the fleet’s age profile.

The biggest five-year concentration of dwt capacity was built between 2009-13 and will be 13-17 years of age when IMO enforcement measures could begin to bite in 2026.

Without sharply increased anticipatory newbuilding orders, or a decline in dry bulk trade volumes, in the intervening years, a large portion of the middle-aged fleet will have to continue trading towards the end of the decade (at potentially slower speeds) in order to avoid a squeeze in cargo carrying capacity

Meanwhile, carbon emissions could continue to trend up. In fact, a recent report by Marine Benchmark indicates a net increase in maritime greenhouse gas emissions since 2011, as the effects of an expanding global fleet have surpassed efficiency gains. As for dry bulk carriers, Marine Benchmark estimates annual average growth in emissions of close to 3% p.a. since 2011.

The combination of low newbuilding deliveries, a potential rebound in demand and an ageing fleet implies that CO2 emissions are more likely to track fleet growth this decade, which suggests that the shipping industry cannot deliver an absolute reduction in CO2 emissions by 2030

In addition, the results of Marine Benchmark’s analysis show that, between 2011 and 2019, international AIS tracked maritime CO2 emissions rose at an average annual rate of 2.1% to approximately 800mt CO2 annually (fuel consumption for main engines and aux engines, without boilers). The current pandemic has weakened this growth to 1.7% .

However, there are positive factors have lowered the carbon intensity of the shipping industry, such as:

These positive factors have lowered the carbon intensity of the shipping industry and brought the IMO’s dual goal of reducing CO2 emission per transport work by 40% between 2008 and 2030 tantalisingly close. Indeed, the latest GHG Study showed that some measures of international shipping’s carbon intensity have already declined by more than 30% since the baseline year of 2008.

Nevertheless, despite these improvements, it is clear that aggregate CO2 emissions have resisted decline. 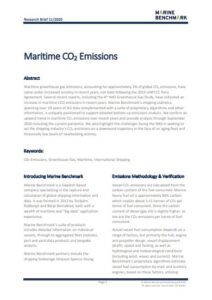