Home
»
Uncategorized
»
Loading soya beans in Brazil: What to be aware of

In general, the report provides an overview of the soya bean trade in Brazil starting with the history of the soya bean’s first arrival in Brazil from the United States in 1882 and goes on to discuss the cultivation of soya beans as a crop in Brazil, the annual national production figures, the annual export figures, the export routes for the beans, the grading of the beans, and much more.

The report stresses that

All foreign vessels operating in Brazilian waters must comply with the relevant standards issued by the maritime authority, Brazilian Navy’s Directorate of Ports and Coasts (DPC)53. Otherwise, there are no local specific conditions for port handling and sea carriage of soya bean in bulk.

The shipper is legally responsible for providing the carrier with all necessary description of the cargo intended for carriage, sufficiently in advance of loading, and for making sure that all legal
requirements and procedures according to the local legislation are fulfilled, particularly concerning the Customs and MAPA.

On the other hand, the master has an obligation to refuse to carry cargo visibly in poor condition or which may pose a hazard to human health or the safety of the vessel.

Before loading, the shipper must provide the master with written information on the intended shipment, including shipper’s identity, full cargo description, destination, gross mass, maximum moisture content, and any other relevant cargo properties and characteristics. The cargo declaration must meet the requirements of SOLAS/VI and the applicable legislation.

The master remains ultimately responsible for the cargo safe loading and stowage.

When required by the shipper, soya bean shipments are treated with phosphine-generating formulations in varying dosages, shapes and application methods. Phosphide tablets, sachets or sleeves are evenly spread on top of or within the cargo for in-transit fumigation, during which time cargo holds must remain gastight for a few days. In addition, IMO provides detailed safety recommendations on the use of shipboard pesticides and fumigation of vessels and cargo holds.

Although more than three-quarters of Brazilian soya bean exports are bound for Asia and arrive at destination generally in good condition, shipments that eventually deteriorate due to microbiologically-induced self-heating invariably result in costly cargo claims and expenses.

Due to its intrinsic nature, soya bean is prone to deteriorate and self-heat whenever its MC and temperature rise above the limits within which the oilseed is biologically stable. The overgrowth of fungi/mould and the consequent cargo overheating tend to be exacerbated during long-haul sea passages, mainly when the beans are carried from warmer to colder climates.

Concerning the temperature, it is noted that although there are variations in quality and storability of individual types, soya beans with temperatures above 21°C are assumed to have a safe storage time between 45 days (with an MC up to 14%) and 125 days (MC up to 12%).

The incidence of severe damage to soya beans during loading, to the point of requiring the removal of the cargo, is relatively low when compared to the growing number of vessels that load this commodity every day in Brazilian ports. Nevertheless, most grain terminals are designed to load cargoes and are rarely fitted with any cargo unloading equipment. Removing substantial volumes of spoiled cargo from inside the vessel’s holds can be a challenging exercise, especially in distant ports such as those in the Amazon region, where facilities may not be readily available for off-loading the damaged cargo. 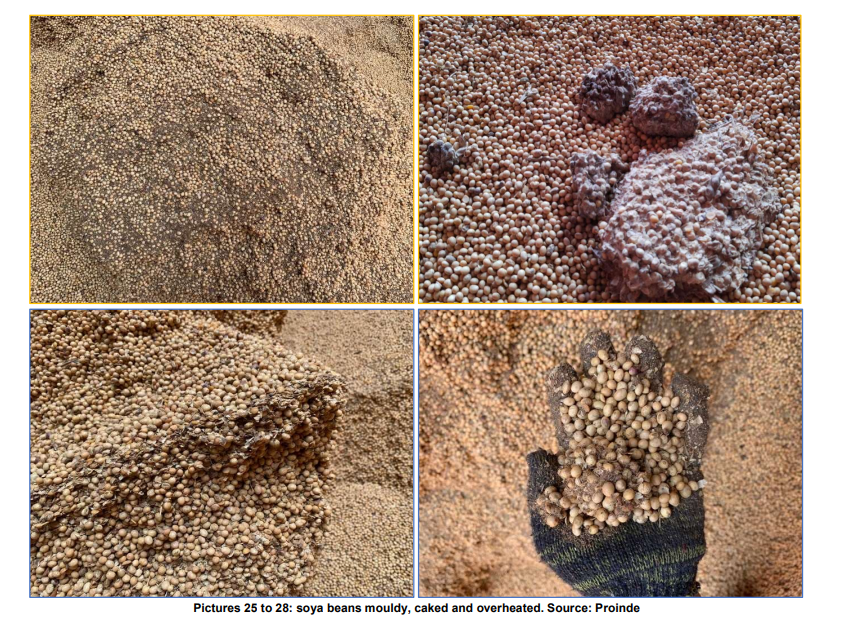 The most common causes of damage to soya been include: 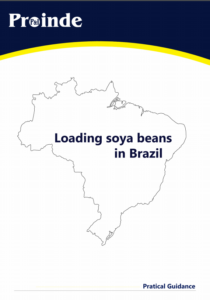