Home
»
Uncategorized
»
LNG production expected to grow by 79% until 2040

During 2020, global natural gas production is estimated to have dropped by 3.6% in 2020 as low oil and gas prices led to lower exploration and production. Rystad Energy estimates the total produced figure at around 3,918 billion cubic meters (Bcm) for the year.

In addition, despite the lockdowns, gas demand was shielded by low prices which made gas competitive in the power sector, preventing a larger drop. Demand for gas therefore did not fall as much as for oil, recording only a 2.5% decline to an estimated 3,840 Bcm. 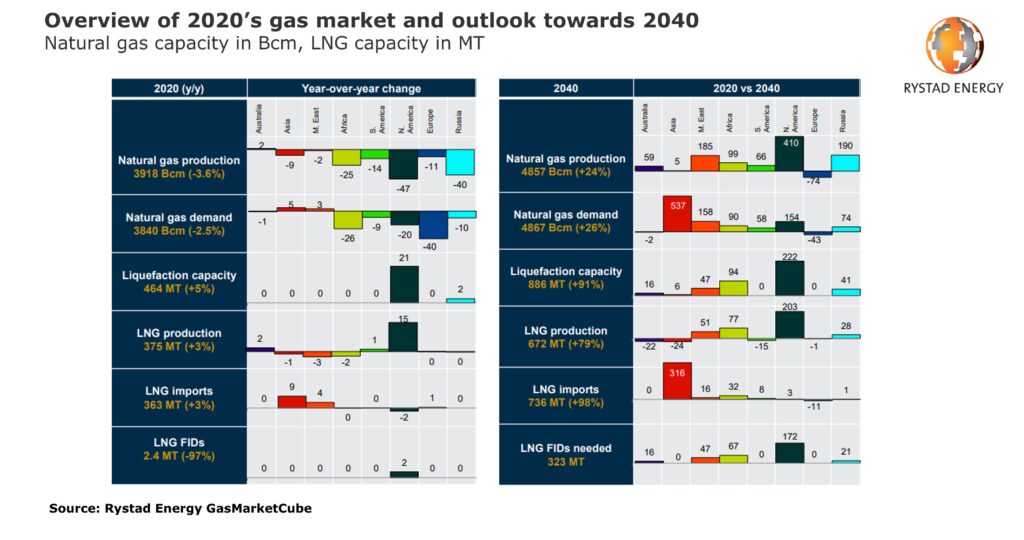 As for the road towards 2040, Rystad says that global natural gas production is expected to grow by 24% to 4,857 Bcm in 2040, with most additions coming from North America, followed by Russia and the Middle East.

Furthermore, global natural gas demand is set to increase through 2040 by 26% to a monstrous 4,867 Bcm, with Asian demand being by far the largest addition, as gas is needed to power the region despite growth in renewables.

Additionally, environmental policies in Europe and growth in renewables will lead to a decline in demand from 2024, with the total demand losses on the continent to reach 43 Bcm in 2040, compared to 2020 demand. US demand is also at risk due to new environmental policies expected to be announced by the Biden administration.

Namely, far exceeding production, the need for LNG imports is expected to grow to 736 Mt in 2040. Due to limited domestic production, Asia will absorb most of the growing LNG supplies to fuel the increasing power demand. China, India, Pakistan, Thailand and Bangladesh will also drive the growth. European imports will drop as pipeline imports are accessible.