A traditional wooden sail training vessel was preparing to enter a small and unfamiliar harbour to berth overnight.

Although the skipper had studied the electronic charts, was concerned about the depth of water and sea room available at the berth.

In order to be certain that sufcient under keel clearance would be achieved, the skipper sent two crew members in a small tender into the harbour to check the berth’s suitability.

After a report back from the two crew in the harbour, the skipper was satisfed that all was well, so proceeded to take his vessel in to the harbour under power.

As the vessel passed through the narrow harbour entrance a loud cracking noise was heard from aloft.

Looking up, the skipper observed that the top of the mast had passed very close underneath power cables that were suspended above the harbour entrance. 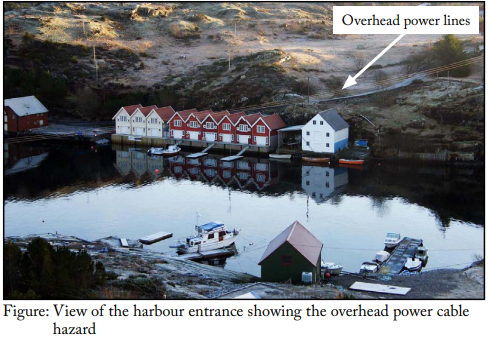 Once the vessel was alongside, the skipper discovered that all of the electronic systems that were connected through the mast had ceased to function.