A bulk carrier loaded a cargo of soya beans in a North American port, prior to travelling to Asia. When loading was completed, the vessel anchored to wait for a favourable tide.

At midnight, the vessel departed and headed through the fairway. A pilot was onboard, and a pilot briefing had been carried out with the Master.

After two hours, a main engine slowdown alarm was triggered due to a loss of cooling water in the main engine. The Master ordered half head, but there was no response from the engine.

An alarm then sounded in the engine control room, which had been triggered by one of the main cooling fresh water pumps stopping.

The Chief Engineer ran out of the engine control room to the main engine and saw that cooling water was coming out of a crack on one of the cylinder cover jackets.

The Chief Engineer alerted the Master. The Master ordered the starboard anchor to be dropped. He ordered dead slow astern, then full astern, but still nothing happened. The vessel was now drifting towards the port side of the river.

Because of the excessive loss of cooling water, the high cooling water temperature alarms sounded for all cylinders.

Although the starboard anchor had been dropped, it could not prevent the grounding which happened minutes later.

Following the grounding, the Chief Officer checked all the ballast tanks for any water penetration. There were no damaged tanks, but the hull was dented. The coast guard also boarded the vessel and carried out an inspection to see if there was any pollution, which there was not.

The vessel received tug assistance and returned to the loading port for more detailed inspections.

It was later found that the cracks were caused by overtightening of the locating bolts during the last cylinder cover overhaul. The manufacturer had issued a service letter, which included a warning for overtightening the screws. This is a delicate process that need to be done correctly. 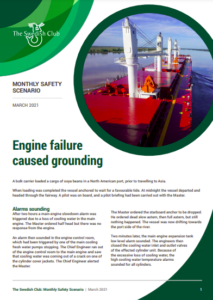