The 102nd session of IMO’s Maritime Safety Committee (MSC 102) took place remotely on 4-11 November. The session agreed on measures to make information that may facilitate safe crew changes, a main area of concern for shipping since the start of the pandemic.

Among the key takeaways during MSC 102 was the approval of an MSC circular including the recommended framework of protocols for ensuring safe ship crew changes, according to DNV GL.

Moving to technical matters, the Committee:

Maintenance and inspection requirements will be given retroactive application for all ships.

-Approved new guidance for weather-dependent lashing of cargoes: The MSC 102 approved modifications to Annex 13 of the Code of Safe Practice for Cargo Stowage and Securing (CSS Code) to determine weather-dependent acceleration reductions on non-standardized cargoes, including vehicles on ro-ro ships and heavy cargoes. Amendments to the following instruments were approved accordingly:

-Approved interim guidelines for the second-generation intact stability criteria: The 2008 Intact Stability Code uses empirical criteria, based on past casualty data. Hence, as ship design evolves, the uncertainty of these criteria increases. The new second-generation intact stability criteria are performance-based and rely on advanced numerical simulations or simplified criteria in addition to operational measures.

-(STCW Code) Crew certificates: The MSC 102 adopted amendments to Table B-I/2 of the STCW Code to clarify the certificates or documentary evidence for seafarers required under the STCW Convention.

-(SOLAS) Watertight integrity: Amendments to SOLAS Chapter II-1 align the design criteria for watertight integrity in parts B-2 to B-4 with the probabilistic damage stability approach in parts B and B-1. The amendments address inter alia assumptions regarding progressive flooding, valves in the collision bulkhead and watertight doors. The amendments will enter into force on 1 January 2024, with voluntary early implementation of Regulation 12 on collision bulkhead valves.

-IMDG Code: Amendments to the IMDG Code to facilitate the multimodal transport of dangerous goods. The amendments will enter into force on 1 January 2022, with voluntary application from 1 January 2021.

-(SDC) Watertight doors on cargo ships: The MSC 102 approved, subject to concurrent approval by the MEPC 76, draft amendments to the MARPOL and Load Lines Convention and to the IBC and IGC Codes. The aim is to address inconsistencies between these IMO instruments and SOLAS when it comes to the consideration of watertight doors in damage stability calculations. The draft amendments will enter into force on 1 January 2024, subject to adoption by MSC 103, and have no impact on existing ships.

-(SSE) Fire safety of ro-ro ships: The MSC 102 approved amendments to the “Revised guidelines for the design and approval of fixed water-based fire-fighting systems for ro-ro spaces and special category spaces” (MSC.1/Circ.1430/Rev.1). The amendments extend the maximum height for these fire-fighting systems from 9 to 10 metres for alignment with the definition of special category spaces.

-(SSE) Launching of free fall-lifeboats: The MSC 102 agreed to remove the requirement to launch free-fall lifeboats with the ship making headway at speeds up to 5 knots in calm water, as there is no additional dynamic load on the launching arrangements to be accounted for. Draft amendments to SOLAS Chapter III/33, the LSA Code para 4.4.1.3 and Resolution MSC:81(70) were approved accordingly. The draft amendments enter into force on 1 January 2024, subject to adoption by the MSC 103, with voluntary early implementation. 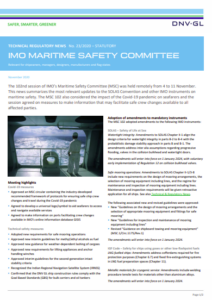 The post Key points of the IMO MSC 102 outcome appeared first on SAFETY4SEA.