Therefore, this Special Report is to alert the shipping industry and law enforcement agencies on the current situation of concern in the Singapore Strait and to provide an insight of the incidents, the modus operandi of the perpetrators and recommendations for the industry and authorities of littoral States.

Although the majority of the 33 incidents reported during January-November 2020 were at a low level of severity (CAT 4), the ReCAAP ISC is seriously concerned with the continued occurrence of incidents in this region. In some incidents, perpetrators were persistent in committing crime by boarding two ships in a row within a short interval and in close proximity, the report warns.

Of the 31 incidents reported in 2019, 14 incidents occurred in the westbound lane of the TSS (between February and August of 2019) and 17 incidents in the eastbound lane (September-December of 2019).

The observations of the incidents reported in 2019 and 2020 are as follows:

The modus operandi of the 64 incidents that occurred to ships underway in the Singapore Strait in 2019 and 2020 (up to 22 Nov) are summarized below:

The observations are as follows:

-The ReCAAP ISC urges the littoral States to take the following measures:

a. Increase patrols and enforcement in their respective waters.

b. Strengthen cooperation of patrols and promote information sharing among the littoral States on latest situation.

The arrests and prosecution of the perpetrators serves as a deterrence to other criminal groups operating in the area, as demonstrated in 2016 when the number of incidents decreased significantly following the arrests of perpetrators in 2014 and 2015 by the Indonesian authorities.

a. Conduct careful voyage risk assessment before entering the Straits of Malacca and Singapore

c. Adopt preventive measures taking reference from the ‘Regional Guide to Counter Piracy and Armed Robbery against Ships in Asia’.

d. While transiting the Singapore Strait, ship master and crew should adopt the following measures:

Explore more in the following report: 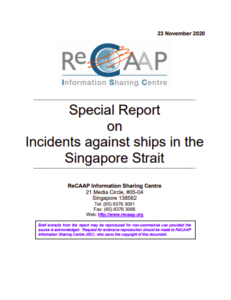