In December’s Sentinel Watch, IMSC focuses on the Liberian flagged MT POLA, which during discharging operations in the KAZ anchorage area in Iraq, it identified a suspicious object attached to the hull, later confirmed to be a limpet mine.

It is reported that the risk to maritime security in the Arabian Gulf and Gulf of Oman remains low.

It is stated that warships continue to provide over-watch to merchant vessels throughout the IMSC area of operation. Vessels transiting the area can expect to hear IMSC warships conducting Maritime Awareness Calls (MAC) on a regular basis. IMSC warships broadcasted over 1000 MAC calls in December to reassure mariners in the region. In 2020 IMSC CTF Sentinel employed a total of 91 military surface vessels spanning from six IMSC partner nations providing assurance in the key waterways surrounding the Arabian Peninsula.

In addition, IMSC advises masters that observe or see any suspicious incident to report such incidents to IMSC via UKMTO.

Also, operators, and Masters are advised to follow guidance in accordance with BMP 5 and national authorities and review the guidance and  responses contained within the IMSC Bridge Cards with regards to: 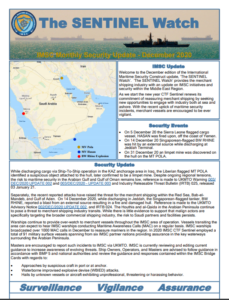