On 4 January 2020, the Marshall Island registered chemical/oil products tanker STONE I was loading vacuum gas oil at Ensted Oil Terminal, Denmark, when the ship started to drift uncontrollably from the jetty during a sudden increase in wind speed.

The ship’s crew and the terminal operators immediately initiated an emergency stop procedure for the loading operation, but were not able to stop the ship breaking away from the berth in time.

As the ship drifted from the jetty, the loading arms on the terminal was torn from the ship’s manifold, resulting in a gas oil spill. There were no injuries.

DMAIB established that the mooring layout on STONE I and the layout of the terminal berth was not compatible, resulting in a mooring configuration, which reduced the ship’s actual mooring restrain capacity. STONE I’s moorings were thus not able to withstand the suddenly deteriorating weather conditions, resulting in a momentary loss of control of the ship.

The ship had a mooring configuration different from the planned, which reduced the aft winches transverse restrain capacity. Though recognized by the crew as not optimal, the actual mooring configuration was assessed to be sufficient for the forecasted weather and was not called in to question by the ship’s crew, pilot and terminal employees. When the weather unexpectedly changed and a sudden increase in wind force started to act on the ship, the inexpedient angle of the four aft lines caused a load on the mooring winches, which exceeded their brake load capacity.

While the alternative mooring configuration was sufficient for the forecasted weather conditions, it did not render sufficient restrain capacity for the sudden change in weather conditions experienced on the day of the accident. Instrumental for the accident was thus the acceptance of that less than optimal method of mooring, which was driven by the necessity of berthing the ship and the absence of alternative mooring options.

The ship’s crew and terminal employees monitored the weather during the loading operation in order to react, if the weather conditions unexpectedly worsened. When the wind started to act on the ship, the crew on STONE I initiated the emergency stop for loading, but within a few minutes the ship drifted from the jetty and the loading arms broke off. The rate at which the wind speed increased did not render sufficient time for the ship’s engines to be ready for manoeuvring or for the terminal to finalize the emergency stop procedure.

Emergency preparedness on board and on shore was based on monitoring a progressive increase in wind speed which would render sufficient time for initiating emergency measures in case of sudden changes in the wind. However, on the day of the accident, the change in weather conditions did not develop progressively, and once it was apparent that the wind speed limit was reached, it was too late to avoid the drifting of the ship and the subsequent oil spill. 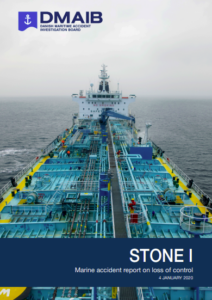