HAV STREYM was a Faroese self-discharging general cargo ship primarily carrying various bulk cargo between ports in Norway and the Faroe Islands. The ship was manned with a master, chief officer, chief engineer, ship’s cook and two able seamen.

When he heard the travelling gantry stop, he reckoned that the gantry had passed and the space above the hydraulic control station was clear. He climbed the guardrail to check the hatch covers visually to make sure they were clear to open.

As the AB climbed the railing, the gantry moved aftwards and the AB’s upper body was jammed between the guardrail and the gantry. When the gantry had passed, the AB fell to the main deck below the hydraulic control station.

The AB in the excavator received a call on his portable radio from the injured AB. The AB immediately rushed to the main deck where he found the injured AB lying on the deck.

Meanwhile, the master received the same call on his radio and rushed to the hydraulic control station together with the ship’s agent, who was present on the ship at the time.

They called for an ambulance, which brought the AB to the hospital, where he was treated for severe internal injuries.

DMAIB has received information from the owner Frakt & Sand Sp/F on the preventive measures that have been initiated in order to prevent similar, future accidents.

This accident exemplifies how risk mitigation can have adverse side effects when the circumstances change.

In this case, the guardrail, which was designed to prevent the AB from falling overboard, became a hazard, because it made it possible for the AB to become jammed.

However, the fundamental safety issue was the inexpedient location of the hydraulic control levers, which provided a poor overview of the hatch covers.

On HAV STREYM there was no other place to mount the hydraulic control levers, which offered a significantly better overview. Therefore, it would be more expedient to introduce measures, which seperately mitigate the risk of falling overboard and the risk of becoming jammed. E.g. having a fixed ladder, warning lights, which indicate that the gantry is moving and where it is, etc. 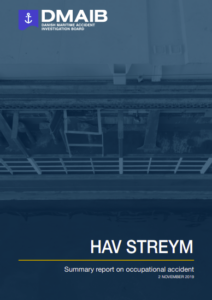