On 10 May 2019 at 1026, the high-speed passenger ship EXPRESS 1 sailed routinely from the port of Rønne towards Ystad, Sweden. The visibility had been limited throughout the morning, due to heavy fog, so it was not possible for the ship’s navigators to see the sea surface. Therefore, navigation was carried out exclusively using the ship’s radars and electronic nautical charts.

The ship passed the breakwater at 1032 and began to increase the revolutions to reach the usual service speed of 32-34 knots needed to keep the schedule.

10 minutes after departure, when the ship was 1.65 nm from Rønne Harbour, the crew of the bridge heard a bump and wondered what could have caused the sound. The master of the ship and the chief officer could not find an echo on the radars to indicate that they could have hit another ship.

Shortly after, an AB reported over the radio that some passengers had seen the EXPRESS 1 hit a smaller ship and that a person from that ship had fallen overboard. The master of the EXPRESS 1 immediately ordered the chief officer to interrupt the voyage and to turn the ship around.

At the same time, the ABs were told to prepare the rescue boat. He then called Lyngby Radio and reported that EXPRESS 1 had hit a vessel. The watchkeeper at the rescue station in Rønne overheard the report on channel 16 and immediately sent a Fast Rescue Boat and the lifeboat MADS JACOBSEN to EXPRESS 1, where they expected the rammed ship to be.

EXPRESS 1 turned around to get back to the collision position to launch their rescue boat, but at the same time the master took care not to get too close, so as not to overrun the ship or the person who had fallen overboard. It was still not possible to find an echo on the radar to indicate the position of the rammed ship.

The FRB reached the EXPRESS 1 first and searched for the rammed ship. Due to the strong fog it was impossible to find by visual search alone. In Rønne Harbour, the port control received the exact position of the rammed ship and passed it on to the rescue service. After that, the FRB and MADS JACOBSEN found the rammed ship.

The crew of the rammed ship had succeeded in getting the person who had fallen overboard back onboard, and the injured person was transferred to land. EXPRESS 1 returned to Rønne Harbour where the ship’s car deck was cleared and the passengers transferred to another ship.

No one was injured on the EXPRESS 1 and the ship only suffered minor damage to the port hull. The ship with which the EXPRESS 1 collided was a Polish tour boat named BALTIC CONDOR, with 12 people onboard.

The combination of lack of time for detecting unidentified ships and adjusting radar settings probably led to an impaired display of BALTIC CONDOR’s echo. The impaired display may have helped to confirm the navigators’ perception that there was no traffic in the area other than a ship at anchor, and thus led to both navigators overlooking BALTIC CONDOR.

It was normal working practice on the ship that one navigator left the steering chair – or the bridge – during the voyage. This was a necessary result of the company’s manning of the ship, the organisation of work and the ship’s interior, which did not allow for the maintenance of a bridge discipline where navigation was carried out by two navigators during the entire voyage.

After the incident, the operator took the following preventive measures: 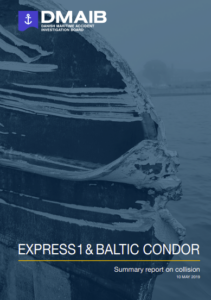