The report highlights that the European Green Deal and the European Strategy for data will necessitate reliable, accurate and centralised data for its initiatives.

The third edition of the report also includes new elements, which have an impact on the Blue Economy, including challenges like climate change, new sectors such as Submarine cables), enablers such as Maritime Spatial Planning, new areas of analysis such as Ecosystem Services or potential solutions like Multipurpose platforms.

Moreover, the report consists of:

However, the ocean has an economic value which is hard to quantify in terms of provision of resources, habitat for marine life, carbon sequestration, coastal protection, waste recycling and
storing, and processes that influence climate change and biodiversity. To the extent possible, the Report covers most of these issues too.

Following the implementation of the European Green deal, the report analyzes the impact of human factor on the marine environment, and especially on the ocean.

The human impact includes the greenhouse gases (GHGs) which are the main contributor to global warming and climate change. Climate change is expected to result in more frequently heat waves, forest fires and droughts in Southern and Central Europe. While, Northern Europe will become significantly wetter, and winter floods could become common.

In the meantime, the report outlines some challenging issues, such as the general economic and political context, providing a background to the Blue Economy, including the sources of financing available for the Blue Economy projects. 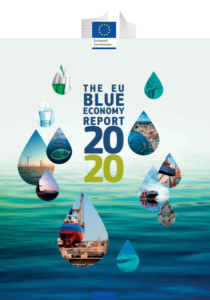