Home
»
Uncategorized
»
BIMCO: Separating trade and emissions is a great step for the industry

To remind, the study highlights that shipping’s methane emissions grew by 150% in the last six years due to the increased deployment of LNG ships.

Mr Pedersen stated that the two previous studies of IMO looked at earlier years with some overlap, same as this study. The 2012 to 2018 period is the continuation of this effort to establish historical annual emissions levels.

Referring to the six year timeframe, he highlights that

In 2009, something interesting happens: The correlation between trade and emissions breaks.

Yet, he comments as problematic the fact that we’re looking at 2012 to 2018 in isolation; Although sometimes it is fruitful to pick and choose a fixed period to understand what happened, it is not as helpful to draw conclusions about the overall trend in emissions from the shipping industry based on “just six years”.

Based on the graph herebelow, he argues that emissions of 2008 from shipping have been fluctuated, which happens year on year as a result of many factos.

In fact, we can be pretty sure that 2020 emissions will show a fall – a direct result of the COVID-19 pandemic’s effect on production activity and world trade, 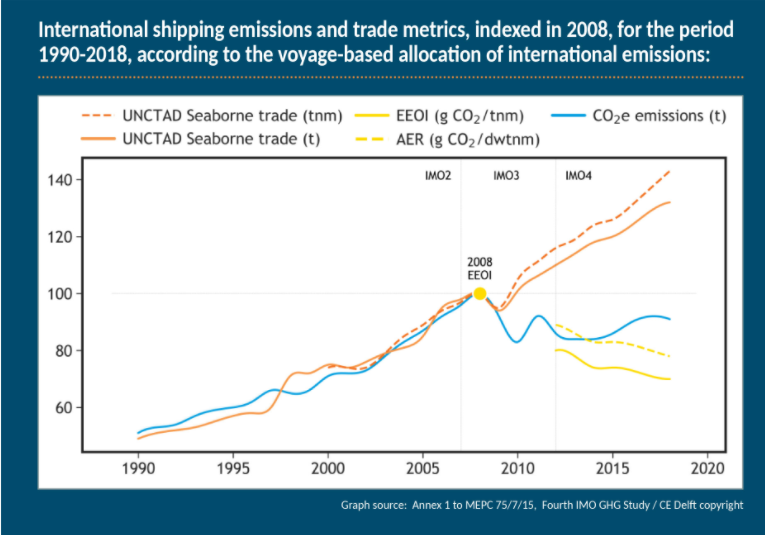 It is stated that the conclusion that emissions increased based on a six-year timeframe is missing the point.

The encouraging news is that demand for shipping is expected to increase between 50% and 100% from 2018 to 2050, while emissions are predicted to either remain the same or less flat.

However, he argues that this is not enough for the shipping industry to meet its ambition of halving emissions from 2008 levels by 2050.

The industry must be able to build zero-emission ships in this decade to accelerate the decoupling of trade and emissions.