On 11 March 2018, during departure from Dampier, Western Australia under harbour pilot guidance, the bulk carrier Bulk India experienced an electrical blackout resulting in loss of propulsion and steering control.

As a result, the ship exited the channel and ran aground. The ship was recovered into the channel with the aid of tugs, before being taken out the channel, to anchor, for further investigation.

The operator did not have in place adequate procedures to ensure that critical spares were identified and their inventory level maintained, to guarantee availability when required on board.

The operator, Kowa Marine Service, has undertaken a fleetwide program of continual improvement of its safety management and operating systems, and staff education and training processes. This included actions directed at identification, operation, maintenance and spare parts management relating to critical plant and machinery.

Rio Tinto have revised escort towage arrangements for ships departing their facilities in Dampier on the basis of extensive simulation exercises and a review of existing risk assessments. As a result, attendance by a second tug has been extended to number 3 beacons.

Further, a comprehensive guidance manual for ship towage operations in Dampier and Port Walcott has been developed.

Ship operators and crewmembers should ensure that systems, machinery and equipment, critical to the continued safe operation of the ship, are thoroughly understood, as well as appropriately maintained and tested. This will reduce the likelihood of an emergency situation relating to these items developing and provide a defence against adverse outcomes, should such a situation arise. 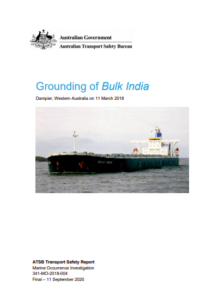