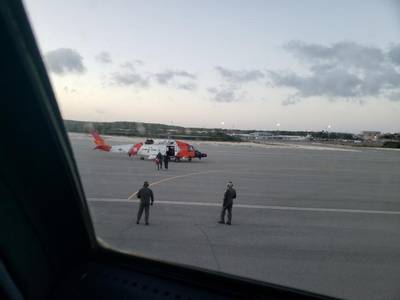 A U.S. Coast Guard helicopter crew walks an ailing mariner to an aircraft in Providenciales, Turks and Caicos, on Wednesday. The man was experiencing health complications aboard the tug Patriarch and needed higher level medical care. (U.S. Coast Guard photo)

An ailing crew member was medevaced from a U.S.-flagged tug Patriarch on Tuesday, approximately 207 miles of east Turks and Caicos, and 287 miles north of Puerto Rico, the U.S Coast Guard said.

The Crowley-owned Patriarch was en route from Jacksonville, Fla. to San Juan, Puerto Rico when the vessel’s master contacted Coast Guard Seventh District command to request a medevac for a 59-year-old man on board who was suffering from medical complications and needed higher level medical care.

The Coast Guard coordinated with the tug to transit closer to Turks and Caicos for the medevac.

Once both aircraft were in Providenciales, the man and a Coast Guard rescue swimmer were transferred to the Hercules aircraft. The Hercules aircrew safely transported the man in stable condition to awaiting emergency medical services in St. Petersburg, Fla.

“We appreciate the partnership and coordination with the Turks and Caicos Governor as we were able to get this man to higher level medical care in a timely manner,” said Capt. Eric Smith, District 7 incident management branch chief. “Due to our vast area of responsibility, having partner nations assist mariners during times of distress is beneficial for all parties, and we appreciate the coordination to help the Patriarch crew.”