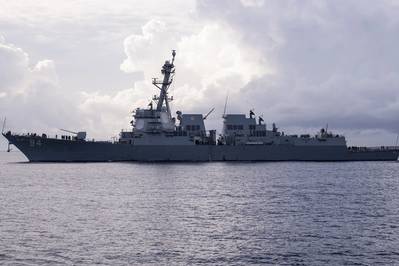 A U.S. Navy ship navigated near the Venezuelan coast on Tuesday in what the U.S. military’s Southern Command called a “freedom of navigation operation,” a day after a cargo ship from U.S. foe Iran docked at a port of the South American country.

In a post on its website, the Southern Command said the USS Nitze, a missile destroyer, sailed in an area outside Venezuela’s territorial waters – which extend some 12 nautical miles from its coasts – but within an area the Venezuelan government “falsely claims to have control over.”

The move comes after the Trump administration in April said it was deploying more U.S. military assets to the Caribbean in part to disrupt alleged narcotics shipments by Venezuelan President Nicolas Maduro, a socialist viewed as illegitimate by the United States and dozens of other mostly Western countries.

With U.S. sanctions on its key oil industry leaving Venezuela increasingly isolated, Maduro last month turned to Iran – another country under heavy U.S. sanctions – for fuel shipments. Washington said it was considering a response to those shipments but took no military action.

On Monday, the Iranian-flagged cargo ship Golsan docked in the Venezuelan port of La Guaira carrying what Iran’s Embassy in Caracas said was food to supply the South American nation’s first Iranian supermarket. There was no indication that the Golsan and Nitze confronted each other.

Neither Venezuela’s information ministry nor its armed forces’ press office immediately responded to requests for comment.

Although President Donald Trump has insisted that all options are on the table to oust Maduro, U.S. officials have made clear there is little appetite for military force.