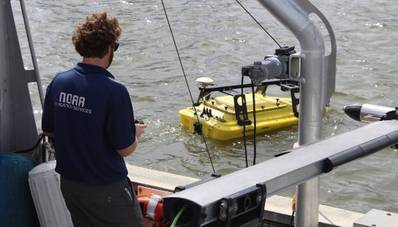 The advent of autonomy in the maritime and subsea space has received a significant boost with the announcement that a pair of U.S. government titans, the United States Navy and NOAA, have inked an deal to jointly expand the development and operations of unmanned maritime systems.

“With the strengthening of our ongoing partnership with the Navy, NOAA will be better positioned to transition unmanned maritime technologies into operational platforms that will gather critical environmental data that will help grow the American Blue Economy,” said retired Navy Rear Adm. Tim Gallaudet, Ph.D., assistant secretary of commerce for oceans and atmosphere and deputy NOAA administrator.

The Naval Meteorology and Oceanography Command’s mission is to define the physical environment from the bottom of the ocean to the stars to ensure the U.S. Navy has freedom of action to deter aggression, maintain freedom of the seas and win wars. For over twenty years, Naval Oceanography has been a global pioneer in the development and use of unmanned systems.

“This agreement lays the foundation for collaboration, engagement and coordination between NOAA and the U.S. Navy that our nation has never seen before,” said RDML John Okon, commander, Naval Meteorology and Oceanography Command. “It will help us take advantage of each other’s strengths to advance each of our strategic and operational mission priorities.”

The new agreement corresponds with rapid expansion and innovation in the use of unmanned systems across the government, academia and private enterprise. A timely example of how NOAA and the Navy are working together with unmanned systems is the ocean unmanned glider project to improve hurricane prediction. For the third year, NOAA, the Navy, academia and private industry are deploying unmanned ocean gliders from the Caribbean Sea to the eastern seaboard that demonstrate unmanned maritime system’s observations can improve hurricane intensity forecasts.

The new pact formalizes the Commercial Engagement Through Ocean Technology Act of 2018, that directs NOAA to coordinate with the Navy on a wide range of functions including research of emerging unmanned technologies, protocols for acquisition of these systems, and sharing facilities for testing and evaluation. It is an annex to the broader NOAA and Navy Memorandum of Agreement signed in 2013.