OHT said Thursday it had entered into a binding Heads of Agreement with China Merchants Heavy Industry (CMHI) in Jiangsu, China for the construction of two wind turbine generator (WTG) installation vessels.

The company will have options to order two more vessels of the same type. On behalf of OHT, the HoAs were signed by its subsidiary VIND Offshore Installation AS.

The vessels will be jack-ups of GustoMSC design and will be prepared to handle the next generation WTGs, featuring a telescopic crane with a maximum capacity of 2,500t and a maximum lifting height of approx. 165 meters.

The units will be capable of installing offshore wind turbines in water depths up to 65 meters.

OHT says the vessels will have reduced environmental footprint by way of energy and heat recovery, battery hybrid solutions as well as a sophisticated electrical and control system, reducing CO2 emissions by 20% compared to similar units.

As a future option, the vessels have been prepared for fuel cells powered by hydrogen to be installed to cut emissions even further, OHT said.

“By working closely with GustoMSC, the shipyard and key vendors to optimize the design, the commercial and delivery terms are very attractive in today’s market,” the company added.

The first unit will be delivered in early 2023, while the delivery structure for the second unit is flexible, Offshore Heavy Transport said.

Torgeir E. Ramstad, CEO for OHT said: “Through this initiative, OHT firmly establishes its position as a leading, fully integrated Transport and Installation (T&I) company for offshore wind. In doing so, we are responding to client concerns about the lack of capable vessel capacity in the booming offshore wind market. We hear them applauding the development of a capability by a single company to handle the T&I of next-generation foundations and turbines.”

The venture is based on a concept and business model initially developed by VIND Offshore Installation AS and its founder Rune Magnus Lundetræ, the company said.

“We look forward to our involvement in the world’s first integrated pure-play T&I company in the offshore wind segment with interesting triggers for further growth, including the expansion of the Alfa Lift series of foundation vessels and possibly more jack-ups through exercising the options,” he said.

The company is not new to offshore wind per se, as its vessels have transported a plethora of offshore wind turbine components in recent years.

“Since 2017 the company has been targeting a leading position in this market, resulting in several contracts to transport offshore wind foundations. Most notably the ongoing Moray East project where OHT is transporting 48 jacket foundations from the UAE to Scotland,” OHT said. 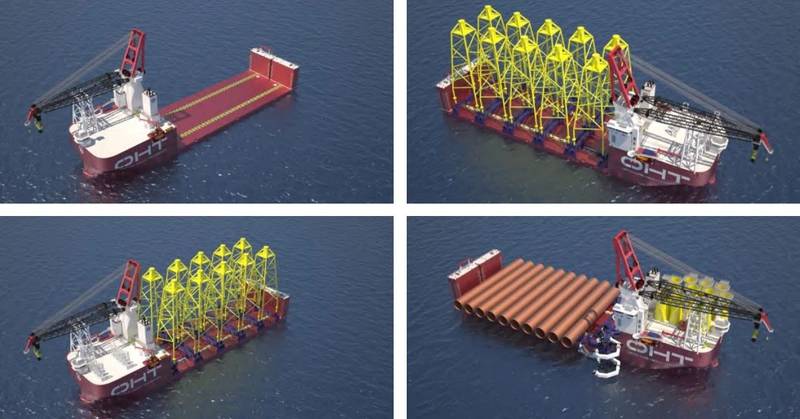 Alfa Lift Foundation Installation Vessel will be delivered in 2021 – Credit: OHTTwo years ago, OHT ordered what it said would be the world’s largest and most efficient offshore wind foundation installation vessel – Alfa Lift – at CMHI. This vessel, to be delivered next year, is designed to install monopiles and jackets from a floating vessel in dynamic positioning mode to achieve higher efficiencies and lower cost.

“Combined with the existing transportation fleet, OHT will be able to deliver class-leading Transport & Installation services of the largest foundations, whether they are produced near to the windfarm or on a different continent,” the company said.

Once delivered, the Alfa lift will transport and install foundations at the world’s largest offshore wind farm Dogger Bank A & B from 2022.

“With the addition of the two jack-up installation vessels, OHT further demonstrates its commitment to offshore wind, securing a leading market position. With this latest announcement, OHT further strengthens its vision to contribute to an efficient and sustainable energy supply for the future,” OHT said.