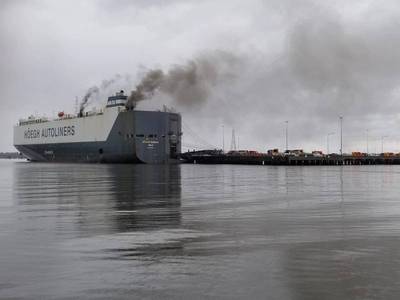 A fire broke out on board the 600-foot vehicle carrier Hoegh Xiamen, at Blount Island in Jacksonville, Fla. (U.S. Coast Guard photo by Jessica Maldonado Gonzalez)

Höegh Xiamen car carrier has been declared “a constructive total loss” following a fire that broke out on the vessel in early June in Jacksonville, USA.

The Höegh Xiamen car carrier is owned by Ocean Yield and is on a bareboat contract to Höegh Autoliners.

The fire broke out on June 4, shortly after the vessel had completed loading operations at Blount Island, Jacksonville, Florida. It was extinguished late on June 12.

Ocean Yield which on Friday said the vessel had been declared a total loss, said it expected to receive insurance proceeds in Q3 2020 of about USD 26 million, which is close to the book value of the vessel.

The net cash proceeds after repayment of debt related to the vessel will be about USD 8 million, the company said.