While St. Lawrence Seaway cargo volumes decreased during the past two months due to economic shifts related to COVID-19, industry leaders said the binational trade and transportation corridor is ready to play its part in the economic recovery efforts in the coming months. Meanwhile, with an increased focus on commodity diversification through project cargo, international shipments of wind energy components in the Great Lakes region are taking off.

Overall St. Lawrence Seaway tonnage from March 15 through May 31 totaled 7.7 million metric tons, down 10% compared to the same time period in 2019. Road salt and project cargo shipments such as wind turbine components have remained strong throughout the last two months. However, cargo volumes of steel-related materials, construction materials, and petroleum declined as automotive plants and work sites closed and people stayed home during COVID-19-related emergency measures.

“Great Lakes-Seaway shipping has continued to get the job done during these challenging times, safely delivering vital grain, renewable energy supplies and manufacturing inputs for domestic needs and world markets,” says Bruce Burrows, President and CEO of the Chamber of Marine Commerce. “Ship operators, ports, suppliers and the Seaway operators have really pulled together to put protective measures in place for our workers and the public and to ensure our transportation system has continued to operate throughout the pandemic without interruption or delay for our customers. Moving forward, Great Lakes-St. Lawrence Seaway shipping is ready to support ongoing efforts to restart the U.S. economy.” 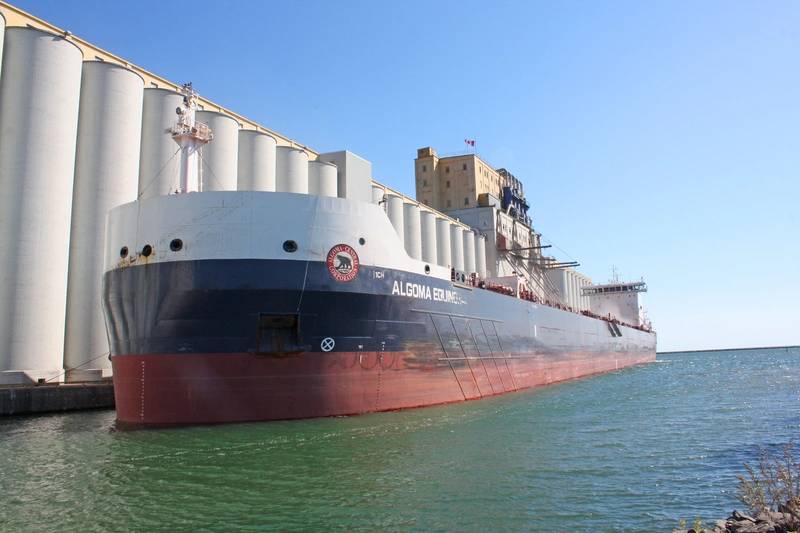 Dry bulk cargo shipments on the Seaway, which include cargoes like stone, cement among others, were down 5%. However, one of the first areas of improvement expected in cargo volumes are construction materials as pandemic-related restrictions continue to be lifted throughout the Great Lakes-St. Lawrence region.

Year-to-date general cargo shipments via the St. Lawrence Seaway, including project cargo like wind turbine components and aluminum, were up 3.5%.

During the first two months of the 2020 navigation season, shiploads of wind-related components were handled across five Great Lakes states at eight American ports, including: Port of Monroe, Port of Erie, Port of Buffalo, Port of Ogdensburg, Port of Bay City, Port of Menominee, Port of Indiana-Burns Harbor and Port of Chicago.

The Port of Indiana-Burns Harbor has received 15 shipments of wind turbine components over the last two months. “We expect at least 10 more shipments of U.S.-built wind tower sections moving by deck barge from Manitowoc, Wis. down to Burns Harbor. These will be coupled with nacelles, hubs and blades being produced in Europe that are arriving into Burns Harbor via the Seaway,” says Ian Hirt, Port Director for the Port of Indiana-Burns Harbor. “We are also expecting several vessels containing components for gas-powered electrical generation stations that are being constructed in the area. These are emblematic of a shift in energy production in the region away from coal-powered electricity.” 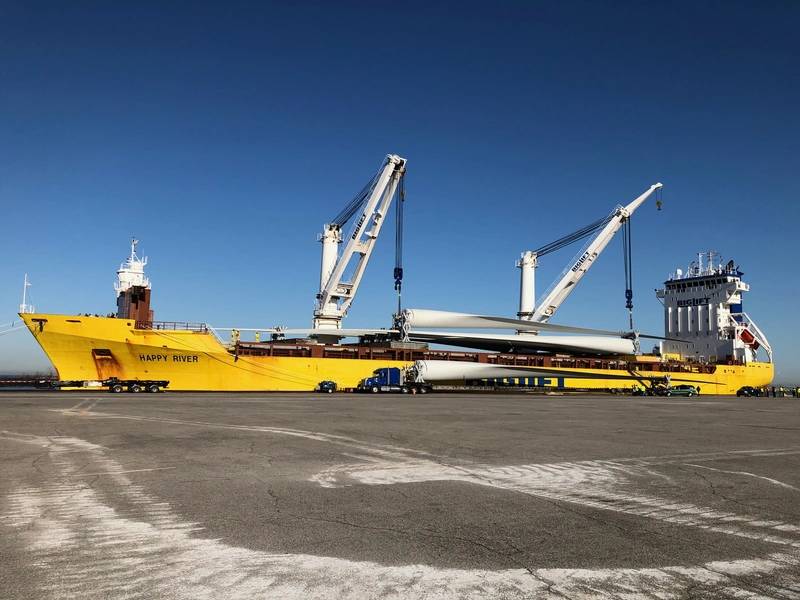 Attracting new business through wind-related cargos and Seaway activity, both Port of Monroe and Port of Buffalo are benefiting from notable increases in shipping traffic.

“If there was a single word to describe the Port of Monroe, it would be resilient,” said Paul C. LaMarre III, Port Director, Port of Monroe. “Everything we have done puts relationships and the broader industry as a whole first. I believe, if you build the relationships, the cargo will follow it.”

Of these relationships, this navigation season brings to light a particularly impactful partnership between the Port of Monroe, Spliethoff Group’s BigLift Shipping, and Ventower Industry—one of four wind tower manufacturers in the United States—all working together to move, handle and manufacture wind towers for a General Electric project based in Michigan.

In addition to logistical advantages due to the Port’s geographical location, BigLift’s vessels are particularly well suited for the Port of Monroe due to their size and the Port’s draft restrictions. To date, the M/V Happy River completed three voyages to Monroe—with eleven more planned—carrying forty wind tower sections per trip.

“The wind project and the tower sections are the lifeblood of our port this season,” said LaMarre. “Not only is this project impactful from the number of vessel calls, which will be the highest in our history for Seaway cargo, it’s with a partner that we’ve been in the trenches with for five years, has the majority of the Port’s laydown area being utilized, is using multiple modes of transportation, and sustaining our port workforce and partners in challenging times.”

Similarly, the Port of Buffalo is off to a strong start, filling their docks a total of thirty-two days since their navigation season began on April 12, 2020. To date, the Port of Buffalo welcomed three Seaway shipments of wind turbine components—two from Germany and one from Korea—and are expecting two more in the coming week.

“To the Port of Buffalo, handling these wind turbines means a full dock for the season. Not onlyare we unloading the vessels, but we’re also loading the trucks that take them to site. So, this is an opportunity to keep us busy all the way into fall,” said Patricia C. Schreiber, Port Director, Port of Buffalo.

Tonnage at the Port of Toledo was down 12% in May compared to May 2019 which is attributed to COVID-19, flooding and poor grain harvest last fall.

“Our grain shipments are down significantly, but we’re hoping a good 2020 harvest will help us make up for some of the loss at the end of the season,” says Joseph Cappel, VP of Business Development for the Toledo-Lucas County Port Authority. “The COVID-19 pandemic dramatically impacted construction and manufacturing and the associated demand for raw material and petroleum products. We expect that as the economy continues to recover, the recovery will be reflected in our tonnage numbers.”

The bright spot for Toledo in May was general cargo, which is up over 225% from last year. “We have handled a tremendous amount of aluminum at the general cargo facility so far in 2020,” adds Cappel. “Smelters continue to produce aluminum and the Port of Toledo is a strategic location where metals can be stored and rapidly deployed into the marketplace when conditions are right.” 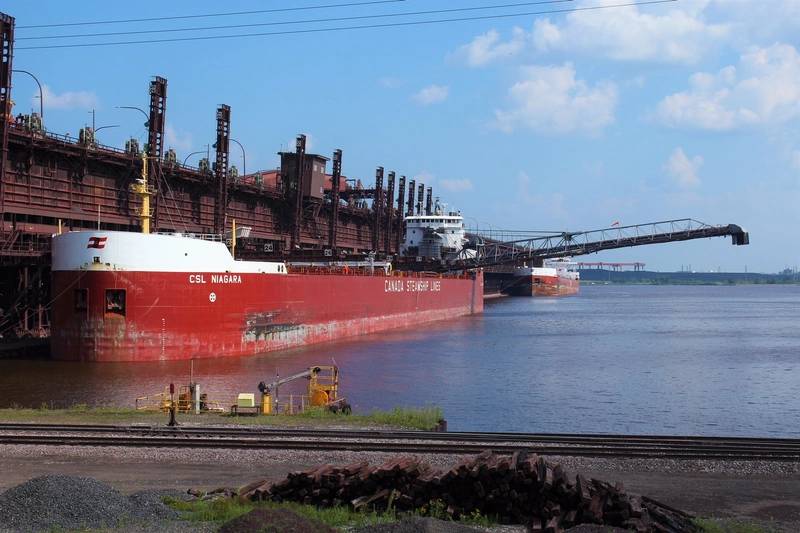 At the Port of Duluth-Superior, general cargo and grain had strong showings, but other tonnage categories were impacted by the pandemic.

“May was an especially difficult month in the Port of Duluth-Superior, with effects of the coronavirus slowing the tonnage pace in each major cargo category,” says Deb DeLuca, executive director of the Duluth Seaway Port Authority. “Through May 31, total tonnage trailed the 2019 pace by 28.5%, led by a sharp decline in coal tonnage due primarily to diminished demand from power plants on the lower Great Lakes. Iron ore, the port’s perennial tonnage leader, also slipped in May, ended the month 6% behind last season’s pace. On a brighter note, grain tonnage finished May almost 26% ahead of the 2019 pace and 39% ahead of the five-season average. General cargo tonnage also registered an increase, closing the month approximately 9% ahead of last season and 11.5% above the five-season average.”