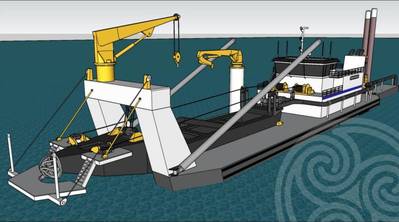 The new dredge, General Bradley, is currently being built by Hagler Systems at the Halimar Shipyard in Morgan City, La. It will be 341 feet long with a 6.6-foot draft.

Callan said it intends to deploy the General Bradley from early 2021, primarily for brown water division projects. The dredge will be suited for both maintenance and capital dredging projects.

“The General Bradley is a demonstration of our commitment to capital improvement projects along the Gulf Coast region,” Maxie McGuire, President of Callan Marine, said in a statement. “The Bradley will transcend our ‘middle market’ offering and truly be a difference-maker in large river and ship channel dredging.”

McGuire told MarineLink in a recent interview that the expansion of Callan’s fleet is a direct response to increased opportunities and the direction of the dredging market.

“The market is extremely busy and we are fortunate to have clients that are willing to make these investments to grow infrastructure,” he said. “Callan Marine has a very healthy backlog at this time, and we feel there will be a great dredging market for years to come.”

The General Bradley will be Callan’s fifth dredge, following the arrival of the powerful 32-inch General MacArthur, which entered service earlier this year. Other dredges in the company’s fleet include the 18-inch General Pershing, 16-inch General Patton and 12-inch General Eisenhower.