Home
»
Port News
»
VCFI Rises By 5.35% In October Due To The Upward Trend In Maritime Transport

The Valencia Containerised Freight Index (VCFI) for October recorded a rise of 5.35% over the previous month and confirms the upward trend in maritime transport that began this summer. This increase in the movement of goods is reflected in the reduction of the idle fleet, which represents 1.6% of the total active fleet. This is the third consecutive month that the VCFI has grown to reach an all-time high of 1,336.95 points. By area, in October, freight rates increased in both the Western Mediterranean, by 2.11%, and the Far East, by 7.25%.

The overall demand for maritime transport continues to increase and has been growing for four consecutive months (up to September, the latest data available), as shown by the main indices. As Alphaliner advances, demand remains unusually strong for the time of year in which we find ourselves, with important factors behind growth such as the increase in e-commerce in the United States or production and shipments in China as a result of Golden Week. To these factors we must add the macroeconomic scenario which brings a dose of global uncertainty to maximum levels. 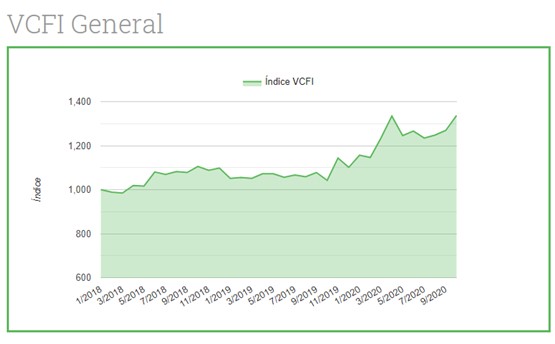 As a result of the boost in demand, the idle fleet has been reduced considerably in recent weeks, reaching 378,802 TEU at the end of October and representing 1.6% of the total active fleet. In fact, when comparing October’s idle fleet levels for different years, the current year shows the lowest level of idle fleet in the last 5 years (Alphaliner). In addition, the capacity offered on two of the world’s main container routes, the Transpacific and Asia-Europe, show unusually high capacity levels for the current time of year and in comparison with previous years.

In this sense, it should be noted that 477,194 TEUs were mobilised in Valenciaport in September, the fifth best month in its history in terms of container management and the month of September with the highest number of TEU movements. This is a positive figure that began in August when the historical record for TEU movement was registered (503,482).

When the behaviour of freight rates in the thirteen geographical areas under study is analysed, a clear heterogeneity can be observed between them. While three of the areas remain unchanged from the previous month (Atlantic Europe, Baltic States and Atlantic Latin America), others show slight variations of less than one per cent, such as Central America and the Caribbean and the United States-Canada in the positive direction, or East Coast Africa or Pacific Latin America in the opposite direction. The destinations located on the Far East routes, particularly the Indian subcontinent, the Middle East and the Far East, which are the ones that end up conditioning the general evolution of the VCFI, have seen strong increases.

As for the Western Mediterranean sub-index, freight rates change again in October to the dynamics of growth with 2.11% after a 5.40% reduction the previous month, bringing the index to 1,040.53 points, which represents little accumulated variation since its inception in 2018, showing the absence of a sustained trend in export freight rates in this area. Despite this rise in October, exports from Valenciaport to some of the main markets in this area are not going through their best moment. A certain stability has been maintained with Algeria over the past month following a progressive drop in traffic since June, while there has been a decline in Morocco according to the latest data published in September, thus breaking with the upward trend which began in April.

As far as the sub-index with the Far East is concerned, October continues the upward trend that began in August, taking it to a new all-time high of 2,206.49 points and 7.25% growth. In addition, the accumulated increase in freight rates since the beginning of the series also reaches an all-time high of 120.65%. Although traffic from Valenciaport with some of the main countries belonging to this area does not show the strength of previous months due to the effects of the pandemic, the supply-demand balance is putting important pressure on freight rates. In fact, the Spanish Foreign Trade data reflect that exports from the Valencian Community to Asia are recovering, precisely because of the dynamism of sales to China, the main economy in the area and where the economic recovery is easing the pressure of the crisis more quickly.
Source: Port Authority of Valencia