Eisenbahngesellschaft Potsdam mbH (EGP for short) presented the new design for one of its Smartrons in Mukran Port yesterday. In cooperation with Railcolor-Ziemon, partners of the Mukran Port Group as well as DBO Bahnoperator GmbH, a design was created that reflects the philosophy of all three parties involved as well as the theme of the Silk Road.

Harm Sievers, CEO Mukran Port Group: “With the new partnership design, we underline the successful cooperation of all parties involved. After the very good development of the last year, we are very pleased to make the Mukran location and the product of the train services between Asia and Europe, including the ship passage between the Russian Baltiysk and Mukran, even better known throughout Germany and Europe with the joint locomotive design. The positive design also reflects all our expectations in the further establishment of this product.”

Frank Kracht, Mayor of Sassnitz: “We are proud of the further development of the Mukran Port on the new Silk Road. The railway’s sea bridge over the Baltic Sea is another step towards the development of Mukran Port and the creation of new non-seasonal jobs.” 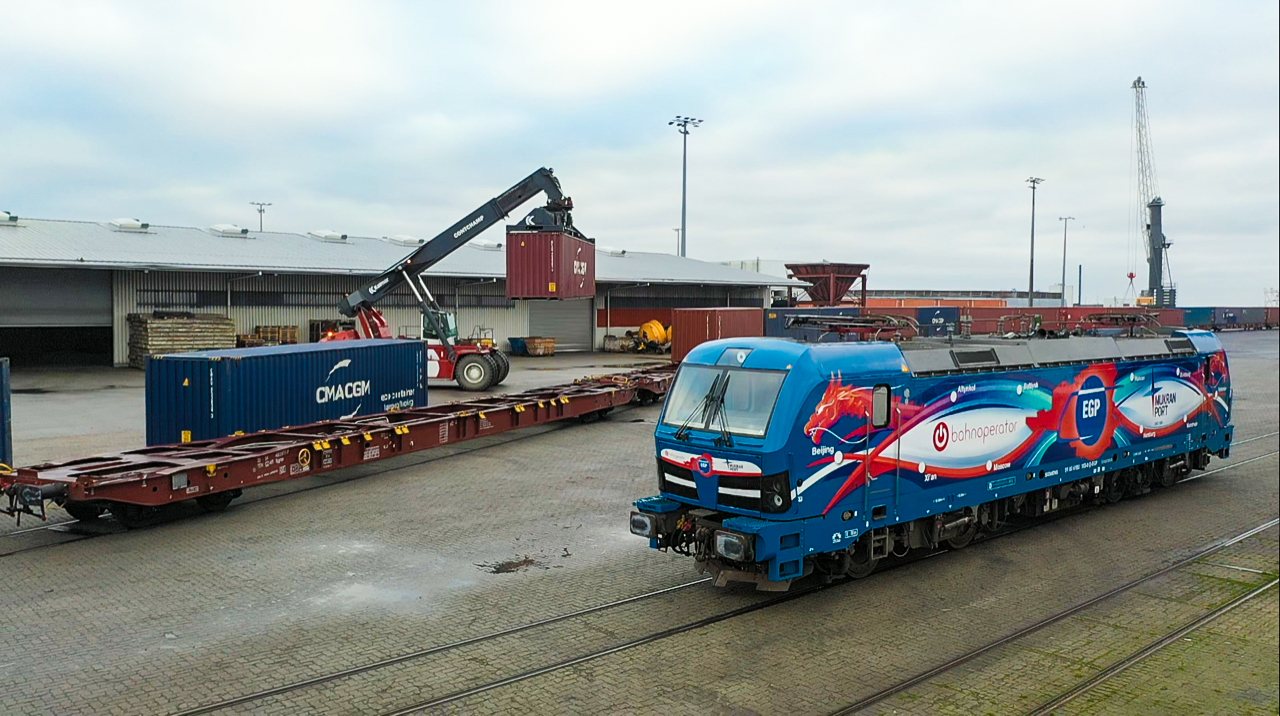 “With the new design of the Smartron, we want to set an example. A sign for the successful New Silk Road project. What started with a trial run last year has quickly developed into a successful project that keeps growing. It was time to draw attention to this with a partnership-based locomotive design,” informs Christian Becken, Project Manager Intermodal Transport at EGP. “We are extremely enthusiastic about our dragon-strong design and believe that it will cause a stir on German railway lines and hinterland terminals,” Becken continues.

Under the “Belt and Road Initiative”, the first trial train on the new alternative Silk Road from Mukran to Hamburg started in November 2019. Over the course of the year, the project developed so well that the hub function of Mukran Port was further expanded. In addition to transport services within Germany, we now also traction the product directly to Rotterdam. EGP provides the rail-side services in Germany for the Mukran Port Group. Only Smartron electric locomotives from Siemens are used. These pull the trains, some of which are up to 740 metres long and carry up to 50 x 40-foot containers, not only quickly but also in a climate-friendly manner across Germany and Europe.

“The locomotive reflects that the partnership project of the new Silk Roads via Mukran has developed into a permanent regular service. At the same time, it serves as an incentive to keep the quality of the product high and to further expand. We are looking forward to further developing the Mukran hub with our strong partners EGP and the Mukran Port Group our side,” says Marcel Stein, CEO, DBO Bahnoperator GmbH.
Source: DBO Bahnoperator GmbH