Maritime equipment suppliers in Germany are satisfied with their performance in the 2019 financial year and, despite all short-term imponderables, expect to achieve good business results in the future. “Thanks to the favourable order situation, we were able to increase our workforce last year. We’re generally in good shape in the sector,” states Martin Johannsmann, Chairman of VDMA – Marine Equipment and Systems and CEO of SKF GmbH. “That paid off in the Corona crisis. We very quickly learned how to respond to the pandemic,” Johannsmann adds. Production in the industry continued with almost no hold-ups, despite occasional bottlenecks at suppliers. Orders could be completed, and international logistics is meanwhile also back on track.

Companies are reporting problems with the international travel restrictions that now apply, as service personnel cannot visit customers to provide support. “But even here new solutions are presenting themselves in some cases. Firms that invested early on in the digital possibilities offered with teleservice now have an advantage,” Johannsmann says. “We’re currently concerned about customers’ increasing reluctance to buy items. However, we can’t make any reliable predictions in this respect and have to continue to proceed cautiously. The measures swiftly taken by the German federal government such as degressive deprecation, loss carry-back and expansion of tax incentives for research and development are important for enabling companies to weather this period effectively and stay competitive in the world market.” 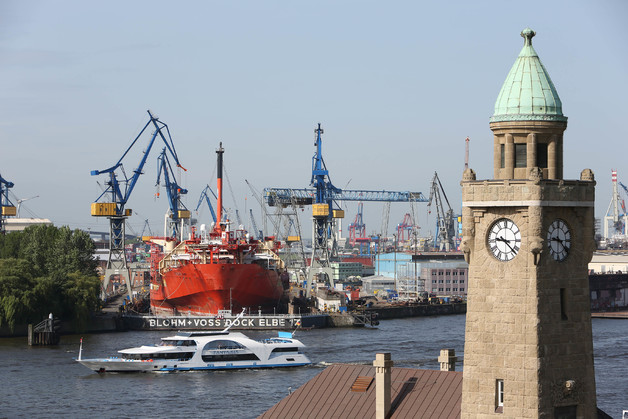 Sales up by 4.5%
In 2019, German marine and offshore equipment suppliers with their 64,500 highly qualified employees (3% more than in 2018) increased their sales to €11.4 billion (+ 4.5%) and registered 3.4% growth in orders. It is difficult to estimate the further outlook for 2020 once this order backlog has been handled. About 40% of companies anticipate a drop in incoming orders in Germany, while 25% of firms currently expect foreign business to decline.

Future with digitalization
“In the long term we expect to see the rapid technical modernization of the global fleet, which is obsolete in many cases. Such an upgrade is essential for achieving the climate targets that have been set,” notes Klaus Deleroi, Deputy Chairman of VDMA – Marine Equipment and Systems and Managing Director of REINTJES GmbH. Overall German makers of marine and offshore equipment supply their components and systems for nearly all ship types under construction. There are, of course, companies that have specialized in specific vessel types and now have to cope with declines in orders, which have been very considerable in some cases. It is vital for these firms to make new developments and refinements attractive for other groups of customers and position themselves more broadly if possible.

Technology drivers here are cruise ships and yachts and particularly also ferries, gas tankers, work boats and ships for navies that are built worldwide and are in demand. “We want to provide technical support for our high-tech products and systems over the entire lifecycle for all ship types and ensure optimal operation both ecologically and economically. It’s now becoming increasingly clear that digitalization is an important driver in the maritime sector”, explains Deleroi. “However, just as important is a generally healthy and competitive European and German maritime industry if it is to remain successful on the world market. In the current situation, the future supportive measures announced by the federal government, such as the bringing forward of the fleet renewal programme, from which German shipyards and the supply industry will hopefully benefit.” Deleroi says.

At the same time, the sector has to attract sufficient suitable young talent for ensuring the further digitalization of products and processes by offering attractive working conditions and interesting assignments. Future-oriented areas such as the standardization of open interfaces with the Universal Machine Technology Interface (UMATI) are important for companies developing new products and services. Only firms that know and implement the overarching digital system developments can hold their own on the market. The joint efforts of the German maritime industry with the compilation of the VDMA standard sheet for the MTP (Module Type Package) give the sector an international competitive edge in this respect.

Drives of the future: hydrogen strategy and power2X
Over 90% of world freight transport continues to be by sea. Climate-neutral drives in new ships or as retrofits are very important for achieving global climate goals. Green hydrogen and the resulting power2X energy carriers are the solution, particularly also for intercontinental cargo transport. One objective of the National Hydrogen Strategy recently unveiled by the federal government is to decarbonise conventional energy sources with the aid of renewable energies. It is up to the German offshore wind industry to generate sufficient green electricity for this plan.

At the same time, the VDMA sees great opportunities in establishing commercial partnerships with other countries that thanks to their geographical location can produce hydrogen efficiently. Large production plants made in Germany are to be established in such countries and operated for the mutual benefit of both partners. Martin Johannsmann concludes: “The current situation in the economy generally and in our sector in particular is problematic, as we have little in the way of reliable indicators for the future. We are convinced that once the Corona crisis has passed we will be successful with our innovations in digitalization along with the implementation of green drive concepts in the global maritime market and make our contribution to promoting climate-neutral logistics.”

Indicators for marine and offshore equipment suppliers in Germany

Different trends in export markets
Other European countries continued to represent a significant export market for German suppliers (attracting 31% of exports), thanks to the favourable order situation of leading European shipbuilding companies in their particular special segments in 2019 as well as a high delivery volume of European manufacturers among one another for producing large systems for global shipbuilding. In this period, the entire Asian region claimed close on 34% of German equipment exports. Of the main Asian countries, China accounted for 22.8% of German suppliers’ exports last year, while Korea’s share fell slightly to 7%. Other Asian countries again increased their shares in 2019 compared with the previous year from 2.4% to 4.1%, whereas trade with North America dwindled to 11.4%. Low level of ship newbuilding orders: In the first quarter of 2020, 186 oceangoing vessels totalling 7.0m gt were ordered worldwide (1st quarter of 2019: 302 totalling 11.1m gt), including 21 in South Korea (102), 67 in PR China (51), 31 in Japan (63) and 21 in the EU-28 (28). Global orders on hand for ships came to 4,433 (4,706) units in the 1st quarter of 2019.

The VDMA represents approx. 3,300 German and European companies in the engineering and plant construction sector. This industry, which is noted for its innovation, export orientation and small and medium-sized enterprises, employs about four million persons in Europe, including more than a million just in Germany. VDMA – Marine Equipment and Systems represents the export-oriented maritime sector serving the global markets of shipping, shipbuilding and the offshore oil & gas industry.
Source: VDMA