The round up this week by the WPSP-IAPH COVID19 Task Force was a mixed picture, with the global reach of the pandemic still being felt in varying degrees depending on region.

For the last three weeks, most ports in the Asia Region have reported a full return to activities as the contagion has diminished there. Ports in China report a significant increase in domestic cargo transits which is compensating in part for reduced international volumes. Nonetheless in early May, container throughput overall of the eight major Chinese hub ports dropped by 7.3% year-on-year, and half of the ports dropped by more than 15% year-on-year according to recent data from the China Ports and Harbors Association . Foreign Trade was particularly affected, with throughput falling by 13.4 per cent year-on-year. With the exception of Port of Tianjin’s year-on-year growth, all other ports reduced in varying degrees. Yesterday the Maritime and Port Authority of Singapore published its figures, which also report a 5% drop in overall container volumes in the month of April. 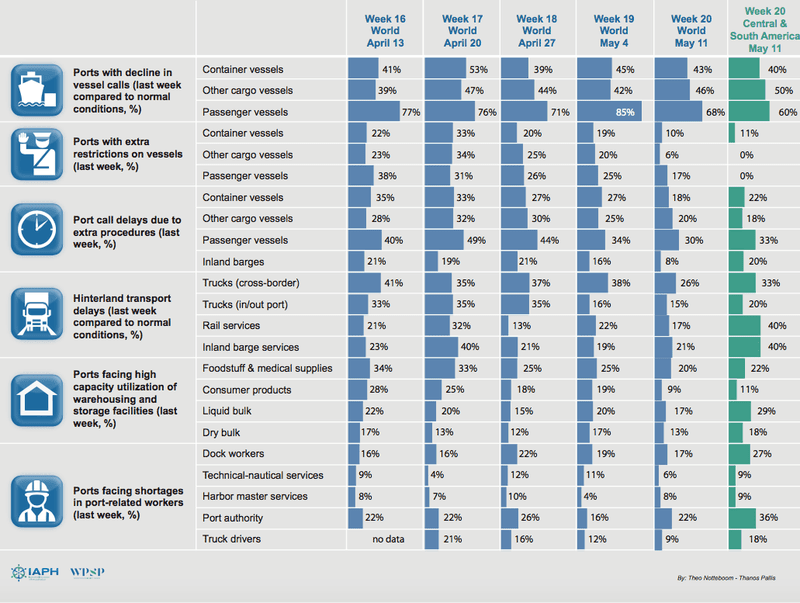 These figures may in part explain the impact in some ports in Europe and North America on warehouse and port quayside utilization, where falls in import volumes are beginning to be felt. The Barometer report this week has detected a trend where either capacity shortages or major utilization increases (shades of green) are on the decrease, whereas incidents of minor to severe under-utilization of warehousing facilities and less distribution activities (shades of red) are on the increase.

“With global container volumes down overall between 8-10% and imports from Asia down between 10-15%, European and North American businesses are operating on survival mode to preserve cash, retaining existing stocks and where possible, deploying suspension or detention of transit requests for goods already on their way” comments report co-author Professor Theo Notteboom. The Professor, who recently participated in the first IAPH Coronavirus webinar looking into the post COVID-19 landscape and role for ports added: “We expect the main impact on Western ports in May and June as the blank sailings in the container sector peak.”

“New normal” modus operandi for many ports
The movement of ships in the past week has developed positively in several ports, with some reporting that they are heading towards a ‘stable situation’. The decrease of cargoes continues in a number of trades. The trend is not homogenous though. In some countries seaborne cargoes started moving in accordance with past expectations, in others the shutdown of the economies continue to affect export/import activities. A decrease in the number of offshore supply vessels due to a reduced activity is present in those ports serving this particular trade.

In addition, the moderate decrease that began last week in terms of the share of ports imposing restrictions on container and other cargo vessels accelerated this week. Nine out of ten ports did not impose any restrictions on container vessels and other cargo vessels, the highest figures to date in the Barometer. The picture for passenger vessels also shows a strong improvement: 80% of the responding ports have not imposed additional restrictions (compared to 69% last week and 44% in week 15). The share of ports imposing extra measures on all incoming passenger vessels has stabilized at around 10%. 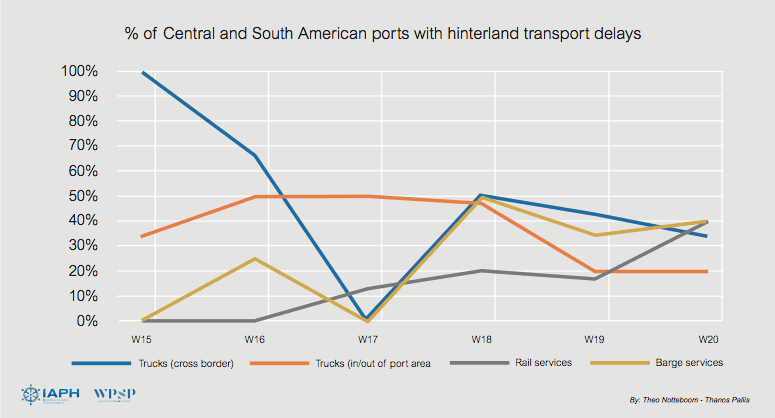 The situation for hinterland transport is on average more disrupted than what can be observed around the world, particularly for rail and barge services. Nonetheless, the number of ports confronted with disruptions in trucking activities in/out of the port areas is gradually declining.

In addition, some 27% of Central and South American ports face shortages in dock workers, a figure that is higher than the global picture and in line with what was observed in week 15. Staff availability at port authority level is also lower compared to the global sample, although strong fluctuations are observed over the period of observation . Finally, 18% of ports in the region are facing shortages of truck drivers compared to 9% globally. Contrary to the rest of the world, the availability of truck drivers in the region is not significantly improving over the past weeks.

Co-author of the report Professor Thanos Pallis summarised : “Overall, this week’s survey results show a marked improvement in the overall global situation in terms of less restrictions being added on vessels and delays impacted by changes in port call procedures. However, in the coming weeks both cargo and passenger transits at ports will not only be impacted by blank sailings and continued shutdown of passenger and cruise vessel services. They are also likely to be impacted by scarcity of anchorage availability at some ports as floating storage of liquid, chemical and ro-ro cargo continues to build up.”
Source: IAPH (World Ports Sustainability Program)