The eleventh and final bi-weekly version of the IAPH-WPSP Port Economic Impact Barometer has just been published, showing a progressive improvement in three of the four survey questions asked to the world’s ports. Active since April 6 2020 on a weekly basis and then bi-weekly as of mid May, co-authors Professor Theo Notteboom and Professor Thanos Pallis are working on a more comprehensive report to be published in September 2020. This summary report will provide a detailed analysis of the trends observed from survey weeks 15 to 29.

Summarizing the work since early April involving eleven global port surveys by the WPSP COVID19 Task Force, co-author Professor Theo Notteboom commented : “The adopted responsive measures and the endorsed adjustments in port operations, along with the full or partial reopening of the economies and, not least, several other initiatives aiming to mitigate risks and secure flows along maritime supply chains, have contributed to the success of most ports to remain operational while securing safety of workforce, providers and users. The current overall status of the port sector as reported by this Barometer during the COVID-19 crisis merits generating long-term observations as well as creating knowledge-sharing mechanisms.”

The summary report in September will also include a section on the way forward, with specific focus on tracking cargo flows, digitalization in ports and the challenges and approaches to risk and resilience in the port environment.

Co-author Professor Thanos Pallis added : “Based on our experience of the last 14 weeks, we should be capable of capturing trends early on in ports and maritime supply chains, especially during a crisis. Building capacity in the port sector to minimise risk is vital, and such reporting will support port resilience in terms of the present and future crises and any similar threats.”
Cargo volumes on the rise with some cruise vessels starting up limited services. First crew changes reported in Latin America. 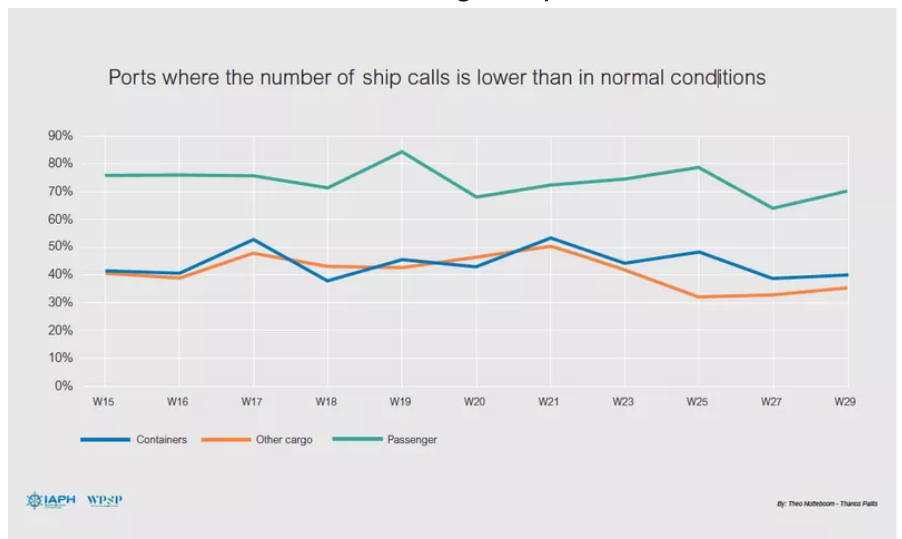 With generalized lockdowns now limited, the return of vessels and the lower numbers of blank sailings continue, yet these happen at a slow pace. As a result, for the first time since starting the measurements, the percentage of ports reporting that the number of container ships calls corresponds to a normal situation has exceeded the 50% threshold. A similar reporting percentage has been recorded in the case of calls of vessels carrying other types of cargoes. Some of the ports that experience a decline of the number of container ships calls reported that further improvement is present but not entirely captured (i.e. vessel calls were just over 5% less than normal). Several ports are certain that in the current conditions and given the numbers of blank sailings of coming weeks they will soon head to almost similar numbers of calls compared to the same period the year before. At the same time, maritime trade volumes have also started to increase, as several economies, or major parts of them, have returned to operations and increased number of transactions.

Meantime cruise ship calls remain at almost zero levels. However, this might not last long. Cruise lines’ announcements to return to operations have become more frequent than in previous weeks. To give an example, in the light of recent EU- produced interim advice for restarting cruise ship operations after lifting restrictive measures in response to the COVID-19 pandemic, TUI announced its ‘blue cruises’ programme, where passengers remain on-board and at sea for the entire cruise, embarking and disembarking from Hamburg. Aida has also announced the restarting of few traditional cruises in North Europe. A handful of small cruise vessels are in operation. The renewed activity recorded in the previous edition of the Barometer from Passenger and Ro-Pax vessels has not accelerated, at least not yet. 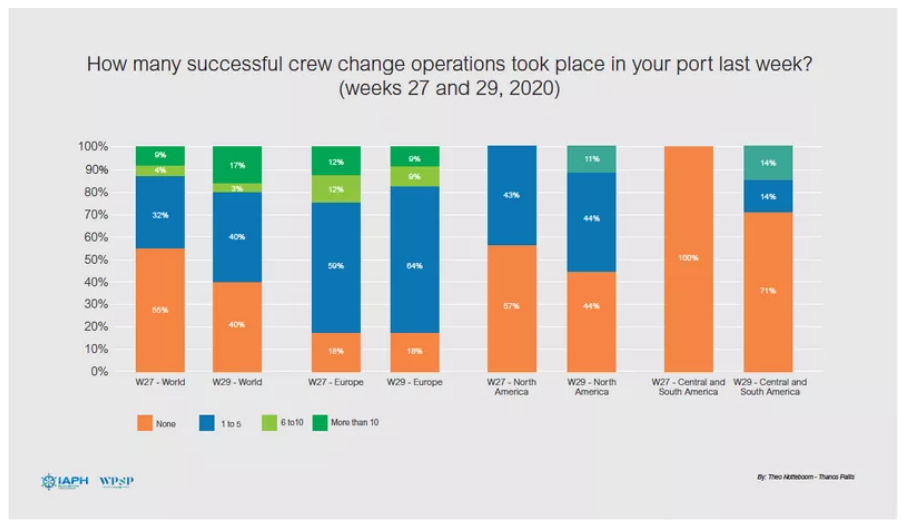 This last bi-weekly edition of the WPSP-IAPH COVID19 Economic Impact Barometer report is published on the World Ports COVID19 INFORMATION PORTAL under the FAQ section “WHAT IS THE ECONOMIC IMPACT ON THE GLOBAL PORT SECTOR?”. Further useful information can be found on this portal, including a guidance document that has been developed by the WPSP-IAPH COVID19 Task Force to provide support for port authorities and port operators to implement actions to deal with the COVID19 crisis.
Source: IAPH