The International Association of Ports and Harbors WPSP COVID 19 Task Force has released its fourteenth report since April and the initial outbreak of COVID19 on a global scale.

The report, complied by Professors Theo Notteboom and Thanos Palis, is based on the comprehensive and complete replies of 73 world ports, which on this occasion has obtained improved responses from Asia and Africa to complement the decent response from the Americas (20.1%) and Europe (41,1%). While global trends have emerged out of the survey responses, regional variations of the impact of the pandemic are prevalent in most findings.

Hinterland delays back on the up
Probably the most significant result of the survey is the consistent uptick in delays on the intermodal connections between ports and the hinterlands, including cross-border cargo traffic.

November seems to present a turning point. While in October none of the ports were reporting delays (6-24 hours) or heavy delays (> 24 hours) in cross-border road transportation, this figure bounced up to 16.3% in November (week 45). While this percentage is far below the figures of more than 40% in weeks 15 and 16, it shows that fewer ports are now experiencing normal cross-border trucking operations. The situation is also deteriorating for trucks arriving or leaving the port: in October 94% of ports reported normal activity versus some 88% in weeks 29 and 36, 78% in week 21 and only 63% in week 15. In November, this figure is down to 86%.

Some 14.6% of ports face disruptions in rail services, up from the record low figure of 4.9% in October (week 41). The situation for barge services is also going in the same direction: this month 83% of ports are reporting normal operations compared to 96% last month.

Professor Theo Notteboom explained : “The reopening of markets and the current wave of restocking/stockpiling have resulted in a surge of containerised flows in recent weeks, with numerous ports in Europe and North America reporting record traffic volumes on the import side, while many key Asian ports are also seeing strong recovery of the volumes compared to the first half of the year. This sudden surge in volumes on several of the big trade routes and mass container repositioning back to Asia is testing the capacity limits of ports/terminals and the inland transport systems, leading to disruptions in hinterland transport connectivity in some ports.”

Food and medical goods stockpiling evident in yards and warehouses
The survey results for week 45 show two main developments in warehousing and distribution activities in ports. 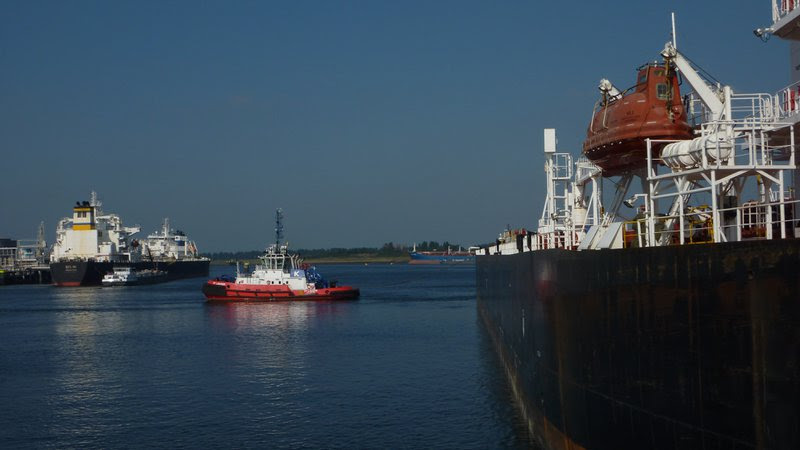 Secondly, storage utilization in the liquid bulk is becoming lower. In this market, 64% of the respondents have seen no changes in utilization levels. However, more than 22% of ports are reporting underutilization of liquid bulk storage facilities in November 2020, a more than doubling of the figure compared to week 29, which was the lowest figure since the start of the surveys recorded. The share of ports with increased utilization levels in liquid bulk storage facilities has decreased from 16-18% in weeks 23 to 41 to 13.8% in week 45. Fuel consumption and storage is down due to lower demand.

Import volume surges place mounting pressure on truck and driver availability
The availability of truck drivers sees the most significant change compared to October in terms of availability of port workers. While the availability remains good overall globally, the share of ports facing truck driver shortages went up from 7.3% to 9.7% (compared to 21% in week 17). This is partly explained by the surge of import volumes in quite a few ports which requires more drivers for inland transport, particularly in North America and Europe. In addition, a large number of truck owner-operators impacted by the first wave have delayed delivery of new trucks and chassis to preserve cash, whilst other players have either been taken over or gone into administration, exacerbating low availability.

Cruises remain mostly inactive, with limited passengers on ro-pax and passenger vessels
More ports are reporting a sharp decline in cruise vessel calls this month. Co-author Professor Thanos Pallis commented: “Cruise ports in Asia, North America, Latin America and the Caribbean remain inactive since the onset of the pandemic in March 2020 and there is very limited economic activity at those ports in these regions that serve this traffic; notably though some efforts for domestic cruises reopening were reported this month in Japan and Fijian Islands. In Europe, where cruise business had slowly started sailing until almost the end of October at a capacity of no more than 20-25% of the lower berths available, the situation in the beginning of November is worse than a month ago.”

In terms of passenger services, it appears that on the one hand, a second wave of COVID-19 cases has already affected the European and North African markets. Passenger vessels have stopped again or will stop soon because of the imposed or new restrictions and lockdowns. Even when passenger vessel calls are occurring on a near-normal basis, passenger volume is substantially lower (i.e. European ports reported a decline of 80%). On the other hand, in Latin America, ports reported that with national and/or local authorities developing further health protocols to safeguard passenger vessels operations, more vessels than in recent months are returning back to service with the respective markets.

Cargo volume throughput in containers, bulk and liquid bulk at ports close 70% at stable level or above 2019 levels
One silver lining is that cargo volume throughputs for containers, bulk and liquid bulk have firmed up in equal measure. A majority of ports reported either stable or a rebound of volumes for all three markets compared to volumes for September and October last year. It is interesting to observe that overall, the figures are very similar for these three traffic categories at both ends of the spectrum. 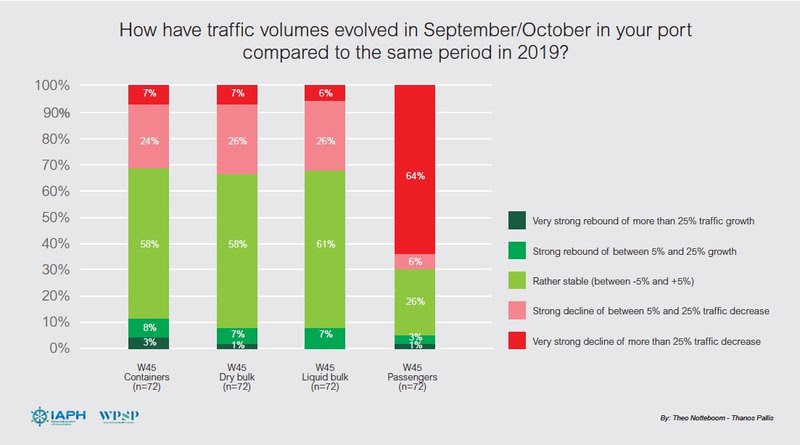 Despite this, in some cases, respondents from ports reported a significant 25 to 50% decrease of mega-vessel calls indicating possible structural changes in shipping networks might be underway. The potential of structural changes is also present in reports by Latin America ports, as some of them reported that although container vessels calls have decreased, containerised cargo has already started to surge.

The situation is rather different in the case of passenger traffic. A total of 64% of ports see a volume drop in passenger traffic of more than 25%. At the other end of the scale, 26% of ports primarily serving ferry services record rather stable passenger numbers. It remains to be seen what the effects of the new wave of COVID-19 cases will be, as several countries around the globe have re-imposed restrictions to citizens’ movements and economic activities.
Source: IAPH