The Port of Savannah handled 4.44 million twenty-foot equivalent container units in Fiscal Year 2020, down less than 1 percent compared to the previous year. Despite COVID-19 disruptions, total tons crossing all GPA docks reached a record 37.77 million, up 0.6 percent, or 223,000 tons, compared to FY2019. Container tons grew 2 percent (560,440 tons) to reach 33.5 million tons for the year, another record.

“Cargo volume reductions related to COVID-19 were offset by the strength of our export markets and record volumes earlier in the year,” said Griff Lynch, GPA’s executive director. “This year’s better than expected performance is the result of excellent teamwork starting at the top with Governor Kemp and our board of directors who have been champions of our ports, to our GPA team members along with the International Longshoremen’s Association, the shipping lines, stevedores, trucking and rail — you have never given in or given up throughout the crisis. Thank you for your commitment and perseverance.” 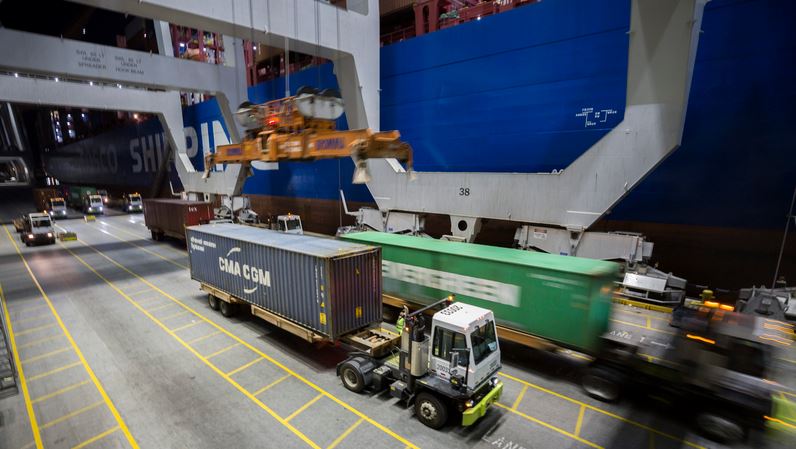 Even during challenging times, port activity coupled with ongoing expansion projects such as the harbor deepening and Mason Mega Rail have quickened the pace of commercial infrastructure investment. According to the latest report from Colliers International, 5 million square feet of industrial space are currently under construction in the Savannah market. In addition, Savannah is home to a total of 74.4 million square feet of warehouse and manufacturing space.

“What sets Savannah apart from the competition is the sheer capacity of the port’s ever-expanding footprint, on and off the terminal,” said Will McKnight, GPA’s board chairman. “Not only are we focused on the future and providing even greater value to our customers, but we have nearly unlimited potential and capacity to grow our business.”

The Port of Savannah’s status at the third-largest container gateway in the country, the nation’s top exporter of containerized agricultural goods and the fastest growing port over a 10-year period, continues to be a strong draw for economic development. Just recently, Port City Logistics announced an $80 million, 1.1 million square-foot development in the Savannah market as two major resin exporters were building out a total of 2 million square feet of new space.

In Northwest Georgia, the Appalachian Regional Port (ARP) handled more than three and a half times the cargo it did the year before, moving 27,132 containers, up 19,610 boxes. “As more customers learn the value the ARP brings to their operations, the facility continues to gain traction and build momentum,” Lynch said. “The inland port is a real success story for GPA, and we forecast business there to continue growing.”

At the GPA board meeting Monday, Lynch reported the first nine of 18 Mason Mega Rail tracks are now moving cargo at the Port of Savannah, two new mobile harbor cranes have been added to Savannah’s Ocean Terminal and a new container yard will be completed at Ocean Terminal by year’s end. Twenty new rubber-tired gantry cranes are slated to arrive at Savannah terminals by December, three new rail-mounted gantry cranes are scheduled to go into service by the end of FY2021, and construction will start soon on the upcoming straightening of Berth 1 at Garden City Terminal to handle more 15,000-TEU vessels. GPA is also upgrading Berth 2 at Colonel’s Island in Brunswick for dedicated Roll-on/Roll-off service.

Lynch said adding new container yard space, doubling rail capacity to 2 million TEUs per year, and growing the fleet of yard and vessel cranes are all parts of GPA’s plan to increase annual capacity from 6 to 11 million TEUs. “We’re confident in the long-term strength of the U.S. economy and our ability to help port users reach their customers more effectively,” Lynch said. “We’re building now to be ready to take advantage of new opportunities.”

Georgia’s deepwater ports and inland barge terminals support more than 439,000 jobs throughout the state annually and contribute $25 billion in income, $106 billion in revenue and $2.9 billion in state and local taxes to Georgia’s economy. The Port of Savannah handled 8.5 percent of U.S. containerized cargo volume and 10 percent of all U.S. containerized exports in FY2017.
Source: Goergia Ports Authority