In the first six months of 2020, the volume of transhipments at Dutch seaports declined by nearly 10 percent relative to the same period last year. Incoming shipments fell more rapidly than outgoing. Bulk cargo, such as petroleum and coal, declined more sharply than container shipments. Statistics Netherlands (CBS) reports this based on new figures on inward and outward maritime transport.

In the first half of 2020, Dutch seaports transhipped 281 million tonnes of cargo, down from 311 million tonnes in the first two quarters of 2019. Inbound cargo (unloading of goods), which accounted for two-thirds of total cargo handling, fell by nearly 12 percent; outbound shipments (loading of goods) on seagoing vessels declined by 5 percent. Both inbound and outbound shipments already showed a decline in the second half of 2019. 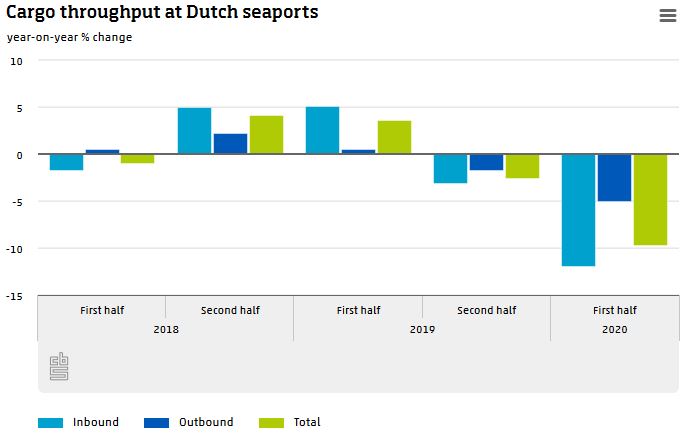 The throughput of liquid bulk (46 percent of total cargo handling) decreased from 144 million tonnes in the first six months of 2019 to 129.4 million tonnes one year later, representing a decline of 10.2 percent. The decrease was mainly seen among petroleum products (13.4 percent) and crude oil (6.5 percent).

Inbound and outbound container shipments fell by only 1.3 percent. Furthermore, loading and unloading of ro-ro cargo was down by 16 percent. Ro-ro (roll-on/roll-off) refers to cargo that can enter and leave a vessel independently, such as cars, tractors but also live cattle. 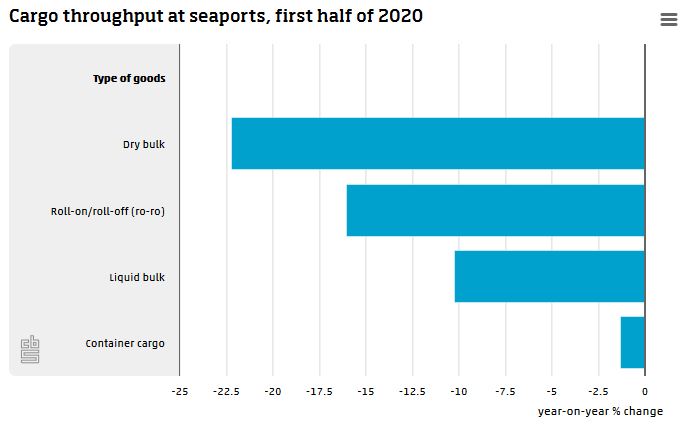 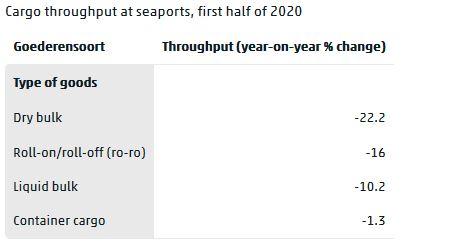 Ore shipments from Brazil down by half in Q2

Of the 15.5 million tonnes of ore transhipped at Dutch seaports in the first half of 2020, 87 percent was unloaded from foreign ports. Forty percent of these goods originated from Brazil. Inbound ore shipments from this country were halved in Q2 2020, from 4.4 million tonnes (Q2 2019) to 2.2 million tonnes.