On the week following the six month anniversary of the World Health Organization (WHO) announcement of COVID19 as a global pandemic, the International Association of Ports and Harbors (IAPH) has published a comprehensive report summarising all findings from its twelve surveys of global ports since early April, including its most recent survey to ports in week 36.

The COVID-19 Port Economic Impact Barometer was developed by a dedicated Task Force operating under the World Ports Sustainability Program (WPSP) and gauges impact of the pandemic on ports from both operational and economic perspective. In its most recent survey IAPH has also surveyed ports of the impact of the economic downturn on port infrastructure investments and investments in general.

The latest week 36 report, which summarises responses from 85 ports from around the world has identified several new trends compared to week 29, not all of which are positive.

Shortages are also slight up for the delivery of technical- nautical services (pilots, towage, mooring). In week 36, 10% of the ports were confronted with moderate shortages, and 2% by major ones. These percentages are considerably higher than those observed in week 29 when only 4% of the sample faced shortages for the delivery of technical-nautical services. Problems with harbor master services (including VTS operators) have been lower throughout the pandemic – never exceeding 8%. Notably in week 36 an 8% of the sample ports are short of personnel for harbor master services, a percentage that is only 1% shy to the peak shortage of week 18.

One third of ports experienced difficulties with Port Authority personnel availability following the COVID-19 outbreak, when government-enforced rules and lockdowns imposed staff to work from home with only essential staff working from port. Adjusting to teleworking and social distancing took some weeks. The peak of the problem was week 15 when nearly 30% of ports were experiencing problems. Since week 16 port authorities confronted with personnel shortages ranged between 22% and 26% (week 18).

Teleworking expanded, transforming working from home as a regular practice, especially for employees in administrative services. Working in shifts became another adopted practice, in order to avoid a whole section/department being quarantined should one of the staff suffer infection. Operational workers attended work as normal in spite of port workers having to respect safety measures (i.e. longer checks; personal protection equipment etc.) in order to prevent direct contact (e.g. social distancing).

As adaptation to the ‘new normal’ continued, shortages since then were limited to approximately 10% of the ports or less; in week 27 and week 29 that percentage was a single digit one. In week 29 only 1.8% of the port authorities reported a moderate to more serious decline in staff availability, by far the lowest figure to date.

The Week 36 survey however indicates that the situation has not improved further. On the contrary, 11% of port authorities face some moderate shortages of personnel and 4% more some more serious problems. 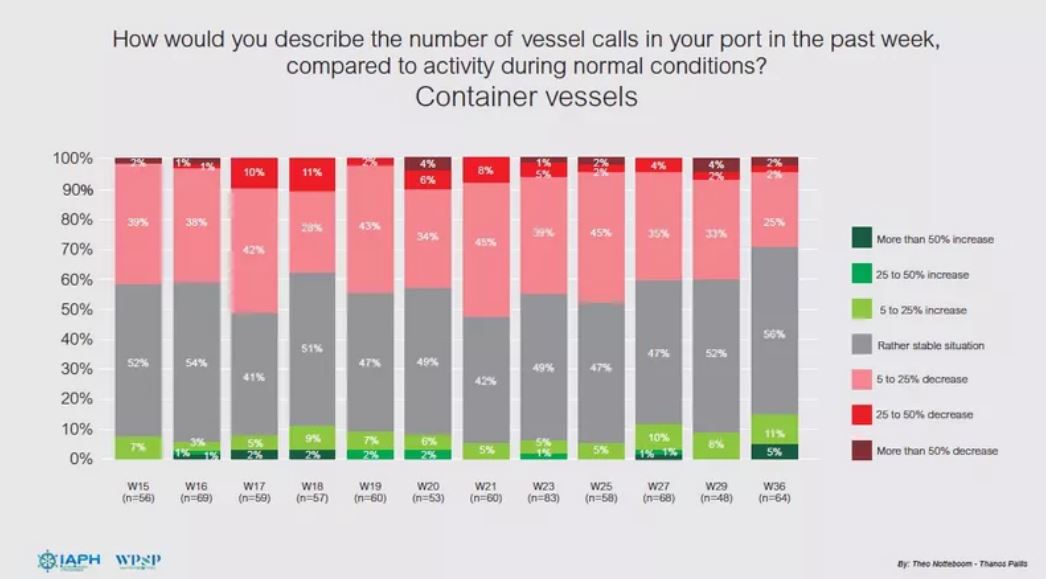 Some 56% of ports are now reporting similar numbers of container vessel arrivals comparable to the same period last year, which is the highest percentage to date. With generalized lockdowns now limited, the return of vessels and the lower numbers of blank sailings continue, yet these happen at a slower pace. About 16% of the respondents even point to increased vessel activity.

By comparison, the share of ports reporting that the number of calls by for other cargo vessel types is rather stable compared to a normal situation fluctuating between 46 and 59%, with the lowest shares recorded in weeks 18 to 21 and in week 36. In the latter week however, about 14% of ports reported a rise of more than 5% in other cargo vessel activity compared to last year, the highest figure since the start of the Barometer.

The cruise/passenger market remains the most affected by the COVID-19 contagion, although the results since week 27 show some improvement. In week 36, 45% of respondents indicate that passenger vessel calls are down more than 50%, in many cases even down more than 90%. In the period from week 20 to week 25 this figure was 61-62% while in weeks 15 to 18 this figure amounted to two thirds of respondents with a peak of 76% in week 19.

The survey results for week 36 show the COVID19 crisis has resulted in 20% of ports reporting an increase in utilization of warehousing and distribution facilities for foodstuffs and medical supplies, a doubling of the figure compared to week 29. From week 19 to week 27 (six survey weeks in a row), more ports faced underutilization than higher utilization levels for consumer goods. The figures reached a balance in week 29 (10% each), with week 36 tilting the balance again towards increased usage of facilities.

Co-author Professor Theo Notteboom commented : “In the current conditions and given the sharp decline in the numbers of blank sailings, an increasing number of ports are heading to almost similar numbers of calls compared to the same period the year before. At the same time, maritime trade volumes have also started to increase, as several economies, or major parts of them, have returned to operations and increased number of transactions.”

Investments impacted as projects are delayed or postponed 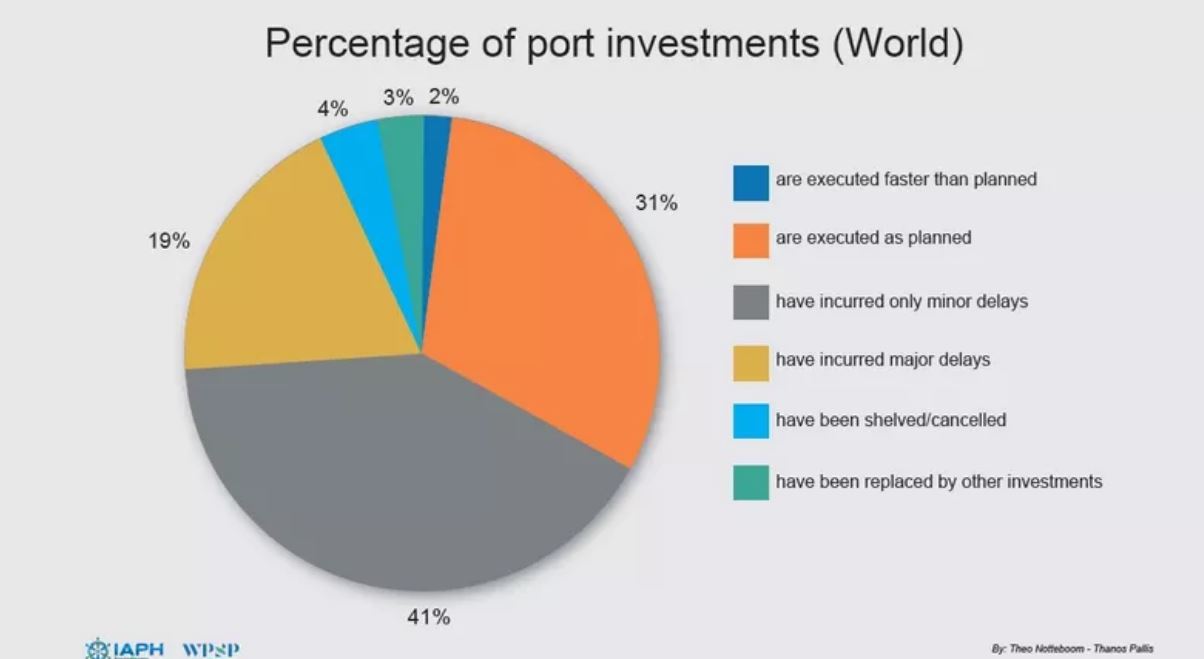 The week 36 survey also included a new question : “Please indicate what situation is most applicable to the majority of planned infrastructure investments in your port since the COVID-19 outbreak.”

69% of the surveyed ports reported that the majority of their investment plans have been delayed in some way or even amended. 41% of the reporting ports informed that the delays in investment have been, at least for the moment, minor. Due to the changing conditions, major investment delays are occurring in 19% of the ports. A few ports (4%) have decided to shelve or cancel existing investment plans, while 3% of respondents have already decided to replace specific investments by other ones. Notably, three of the surveyed ports reported that given the emerging conditions they decided to accelerate their existing investment plans and execute them faster than initially scheduled.

Co-author Professor Thanos Pallis commented : “In some cases existing delays are happening due to difficulties in obtaining authorization by regional, federal, and/or national administrations. In other cases they are happening due to delays by third party contractors, most likely attributable in part to availability of workers affected by the COVID-19 situation. However, in some ports the observed delays seem to be part of longer-term adjustments with ports re-assessing investments once market conditions will allow for a clearer view of the total impact of COVID-19 on social aspects and market demand.”

Projects already commenced during the pre-COVID-19 period continue as planned, but new investments are on hold; some ports reported that they have already decided to postpone scheduled investments for one year. Plans for investments in infrastructure for the cruise industry are questioned more than others, with discussions on-going. Other ports stated that investments in new cruise terminals have been shelved for the time being, with port authorities waiting to know more about the cruise development prospects first before reassessing their potential. All these factors make the case for further monitoring the evolution of the investment plans of ports.

The Barometer was developed with the aim to inform and assess the pandemic’s impacts. With the resurgence of COVID-19 cases in various parts of the world, and given the sustaining interest of ports and the broader maritime community on the impact of COVID-19, the IAPH-WPSP Task Force on COVID-19 has decided to continue the Barometer exercise on a monthly basis. In the coming months, the Barometer will continue to monitor short-term impacts on vessel calls, storage and distribution activities, staff availability and hinterland transport. In addition, new survey questions will be considered in view of assessing longer term implications of the COVID-19 pandemic on global ports. The question on port infrastructure investments, which was added in week 36, exemplifies the widening of the survey scope to include also long-term impacts. Professors Pallis and Notteboom now ambitiously aim to work with international institutions and partners across the global supply chain spectrum to develop a global tracking mechanism for the Barometer capable of quantifying port risk and resilience.

IAPH Managing Director Patrick Verhoeven commented : “The vital work undertaken by Theo and Thanos and the entire COVID19 Task Force from our member ports is exemplified by this comprehensive report. The Barometer findings and their analysis underscore the need to incorporate end-to-end supply chain thinking for ports to minimize business risk and build resilience against future disruptions such as this pandemic. This is the third crisis this century following 09/11 and the financial crisis of 2007 – 2008. Ports will need to accelerate digitalization, redouble their efforts to decarbonize and spur innovation if their aim is to survive and prosper in the twenty first century.”
Source: IAPH