Record high volumes and freight rates between the Far East and the US West Coast (USWC) have caused a spike in the number of containers leaving the Port of Los Angeles empty in a rush back to the Far East, as freight rates are easily five times higher going from East to West than the other way around. In October alone, 325,980 empty containers left the Port of Los Angeles, a 43.3% jump from October 2019.

Though the Far East to USWC is far from a balanced trade in normal times, the past few months have made this imbalance even worse, as sky high freight rates and strong demand have incentivised carriers to return containers to Asia as quickly as possible. For some, this has meant refusing backhaul cargoes, in favour of turning an empty container around as fast as possible; a rational decision when comparing a USD 754 per TEU spot freight rate from the USWC to the Far East with the USD 3,913 per TEU carriers can expect for a container going the other way. 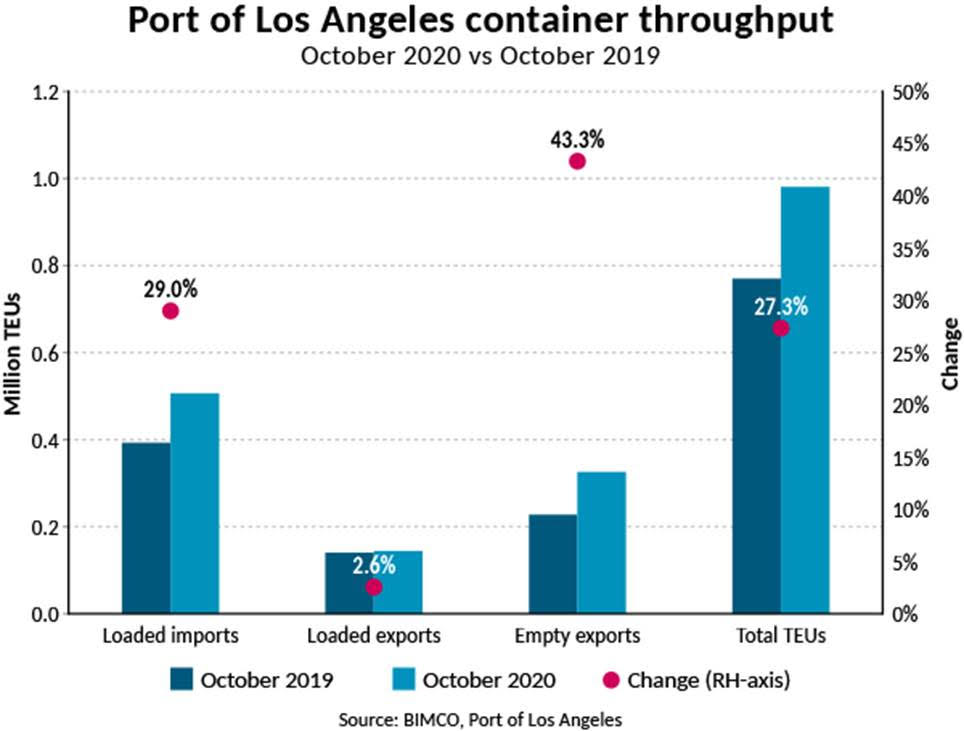 “The unprecedented number of containers arriving in the US, and carriers’ decision to forego backhaul volumes in favour of speed, is creating headaches for many stakeholders. This is for instance the case for US grain exporters who rely on the cheap rates to transport their cargo to the Far East,” says Peter Sand, BIMCO’s Chief Shipping Analyst.

“The strength in US container imports can be attributed to robust consumer demand for durable goods, the restocking of inventories following the disruption earlier in the year due to the pandemic, as well as the upcoming holiday season,” Sand says.
Source: BIMCO